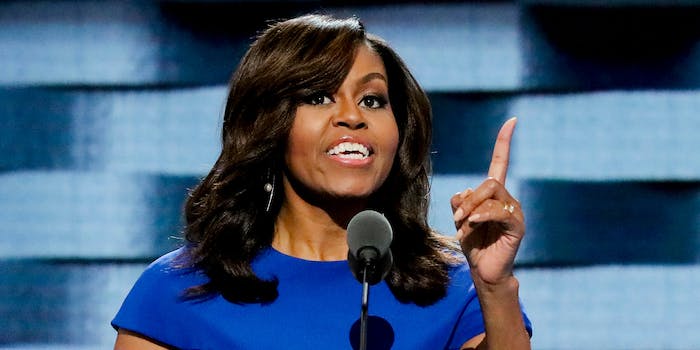 Over the weekend, while on tour for her new memoir, Becoming, Michelle Obama compared living in America under President Donald Trump to a child visiting their divorced dad on the weekend.

“We come from a broken family, we are a little unsettled,” Obama said, according to the Independent. “Sometimes you spend the weekend with divorced dad. That feels like fun but then you get sick. That is what America is going through. We are living with divorced dad.”

Obama’s comments make sense if you aren’t a Trump fan. Power in this country changes hands, and when the opposition is in charge, you can feel a little out of place. That’s magnified if the head of the country is a spasmodic elder gentleman who doesn’t seem all that interested in child rearing. Jokes about Trump aside, her words were more about the experience of the children of divorce, feeling unsettled in a place they know that nonetheless feels unfamiliar.

But men in America these days are never one to pass up an excuse to be aggrieved.

Enter the divorced dads of Twitter, who were extremely upset that Obama dared besmirch their name. The ones who took the time to explain their frustration said that they felt marginalized by the comments.

@MichelleObama while I do admire everything you represent, your comments on divorced dads are misplaced, despicable and surprising coming from you. Most divorced dads I know try their best to create a wonderful world for their children, unlike Trump.

Thanks Madam First Lady for completely demeaning divorced dads and the struggle many of them face, all in the name of trying to describe the President. As a divorced dad I would expect more from you.

Please take this back @MichelleObama, it is extremely offensive to divorced dads: America under Trump like 'living with a divorced dad' for the weekend https://t.co/4iJrvTqjlM

Just the disrespect on divorced dads

Others stepped in to defend the good name of divorced dads.

I know you were trying to make a point but please don’t compare divorced dads to Trump. Many fathers are good men who picked not always the best partners and they really don’t deserve to be compared with Trump. They’ve suffered enough. https://t.co/OvzaDMEr92

I admire @MichelleObama, but I really wish she wouldn’t use divorced dads as a metaphor for Trump. I hear some of them are quite awesome… https://t.co/lQihYgWL6F

Maybe instead of being so online, these divorced dads could go play with their kids?

Although, it’s Tuesday, so nevermind.