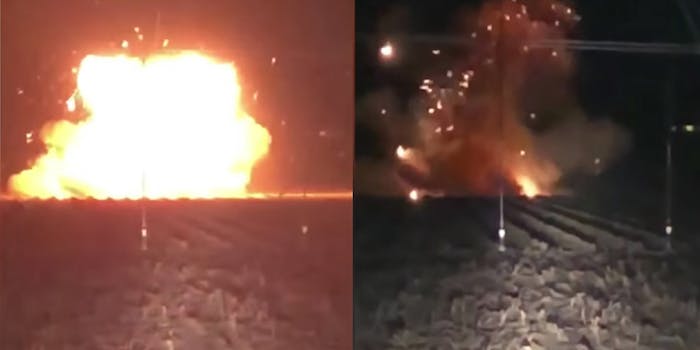 This Texas woman blew up her wedding dress to celebrate divorce

She said the dress 'represented a lie.'

A Texas woman ended her marriage of 14 years with a bang—literally. She threw a divorce party and blew her wedding dress up, multiple outlets reported Wednesday.

Kimberly Santleben-Stiteler, 43, enlisted the help of her father and brother-in-law to set her wedding gown on fire. The final result was even more dramatic and, according to Santleben-Stiteler’s Facebook, “a gazillion times better!!!!!” than just a plain ol’ dress burn.

Santleben-Stiteler hosted the divorce party in LaCoste, Texas, with family and friends, wearing a shirt that said “Y’all I’m single AF.” She told the Centre Daily Times that she wanted to burn the dress because “it represented a lie.”

At the end of the party, Santleben-Stiteler shot the dress, loaded with 20 pounds of explosive material, with a rifle. The explosion was said to be heard at least 15 miles away, according to Santleben-Stiteler’s sister. People on social media have both supported and condemned Stantleben’s celebration, calling it a very Texan thing to do.

This is the most Texas thing you'll watch today.

Y'all giving your exes too much power if you have to blow up your wedding dress.

Despite all of the online chatter, Santleben-Stiteler seems more than satisfied with the explosion of her wedding gown and even changed her Facebook profile picture to commemorate the event. However, Santleben-Stiteler told Circa that she doesn’t recommend that other divorcees follow in her footsteps without supervision.

“I would only recommend it for people that know how to use this stuff,” she said.