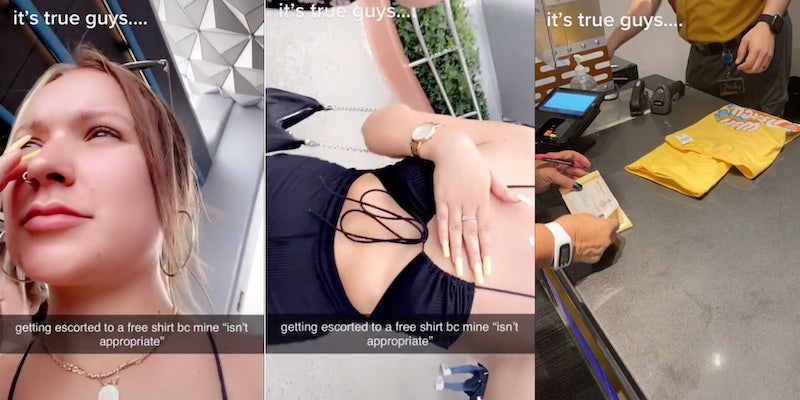 A TikToker went viral in May for alleging that showing 'underboob' can earn Disney visitors a free shirt.

A viral TikTok hack has seemingly been confirmed after an Ohio woman was allegedly forced to change her top at Disney World.

Twenty-two-year-old TikToker Alyssa Schueller was visiting the most magical place on earth, dressed in a ruched black bikini top, when staff reportedly informed her she would need to change. Schueller’s current top was reportedly showing an “inappropriate” amount of skin, so she was given a voucher for a free Disney shirt to wear over her revealing top.

Disney doesn’t have a specified dress code, but it does note that guests must wear “proper attire, including shoes and shirts,” at all times in the park. It is up to Disney’s discretion what exactly counts as “proper attire,” but the park’s website does note that staff members reserve the right “to deny admission to or remove any person wearing attire that is considered inappropriate or attire that could detract from the experience of other guests.” This attire can include “clothing which, by nature, exposes excessive portions of the skin that may be viewed as inappropriate for a family environment.”

In her TikTok video, Schueller is escorted to the gift shop for a free shirt. A caption on the video notes that “it’s true guys,” indicating that Schueller may have been aware of a late May TikTok alleging that showing “underboob” can earn visitors a free shirt.

The remainder of the video sees Schueller flashing a brief glimpse of her bikini top before shifting into her brand new Walt Disney World T-shirt. As she noted in several comments, Schueller had been “at animal kingdom ALL morning without issue.” When she visited Epcot, however, her attire reportedly became a problem.

“If Disney wants to endorse a dress code then they need to do just that,” Schueller wrote. “But the inconsistency…. pls.”

No one in the comments seems to feel bad for Disney—a company wealthy enough to allegedly attempt to claim copyright over not only the deity Loki but also Día de los Muertos, a centuries-old holiday.

“Girl you scammed Disney out of free merch,” one commenter wrote before applauding Schueller for seemingly pulling one over on the multi-billion dollar company. “You should be proud.”

Unsurprisingly, a number of commenters came for Schueller and her original attire. Comments telling Schueller to “save it for the bar hunny” are scattered throughout the video’s comment section. This inspired other viewers to rush to her defense, many using The Little Mermaid to bolster their arguments. Commenters wondered if “Ariel’s sea shells [are] inappropriate too” and argued that most kids likely wouldn’t look twice at a stranger’s outfit.

“I don’t get it, Ariel be wearing less,” one comment reads.

The Daily Dot has reached out to Disney and was unable to reach Schueller for comment.