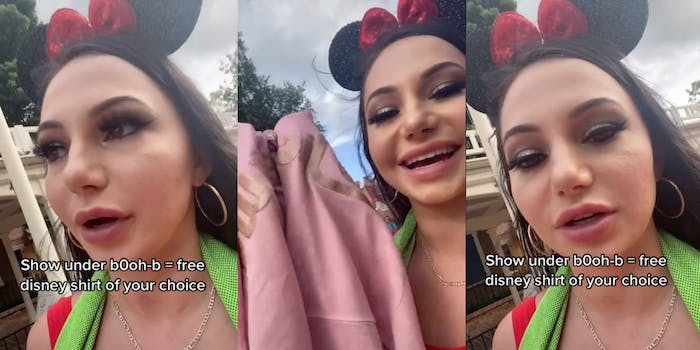 The Magic Kingdom might soon see an influx in scantily clad visitors after a TikToker’s alleged hack to get free Disney merchandise went viral.

TikToker Amanda DiMeo, who goes by @amandaaadimeo on the platform, reveals how she allegedly scored a $75 T-shirt from the gift shop for free in a TikTok video that’s been viewed 15 million of times and liked over 3 million times since being posted on Wednesday.

“I just got a $75 T-shirt just because I was wearing a shirt that was exposing my underboob a little bit,” the TikToker, who boasts more than 780,000 followers, continues. “So, yeah. If you want free Disney shirts, that’s the hack.”

The video then cuts to DiMeo in a bathroom mirror wearing the long-sleeved, pink shirt. “OK, but it’s so cute. And if it’s free, it’s for me,” the TikToker says, using the text-to-speech effect. “Thank you, Disney.”

DiMeo told the Daily Dot that she is at Disney World on a family vacation and was unaware of the apparent company policy to give some dress code violaters free clothing. “I think Disney is doing a great job,” she said of the policy.

She said that while this is not her first video to go viral, she didn’t expect this specific one to go as viral as it did. “But I’m glad it did,” she said. “I love being the center of attention.”

DiMeo also said there was a $50 price limit on the shirt she could choose but that she had her $75 shirt specially approved by a manager at the gift shop.

Viewers are in awe of DiMeo’s ingenuity and are anticipating what Disney is going to look like “for the next few months.”

“Sis got dress coded, but Disney got finessed,” one user wrote.

“Yo, the disney entrance is going to be WILD.” another said.

“I’ll try this next time,” a third pledged.

As Indy100 points out, Disney World’s guidelines state that guests are required to wear “proper attire” and can be removed for wearing clothing that is “considered inappropriate or attire that could detract from the experience of other guests.”

“Clothing which, by nature, exposes excessive portions of the skin that may be viewed as inappropriate for a family environment” falls into that category, according to the guidelines.

The Daily Dot has reached out to Disney World.