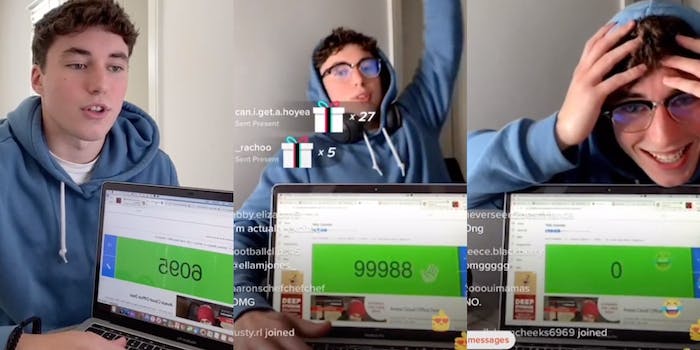 You can become famous for just about anything these days, as TikTok star Devin Caherly recently proved when he went viral for saying the name of the platform’s most popular user, Charli D’Amelio, 100,000 times in a row.

No, really, that’s it. There’s nothing to add. Saying D’Amelio’s name over and over and over again was Caherly’s whole game, and his endurance test received millions of views.

Caherly vowed to say D’Amelio’s name 100,000 times in his original announcement video, which has well over 300,000 likes. D’Amelio has over 101 million followers on Tiktok and is best known for her viral dance videos, and for once being rude to her chef.

Caherly tracked his progress with an online counter, which he pressed every time he said D’Amelio’s name. He live-streamed the entire event. To his dismay, the counter suddenly reset itself at 99,991.

He made a video of the failure with the caption, “I spent 18 hours straight saying @charlidamelio and right before I hit 100,000 this happens.”

Caherly’s attempt was similar to YouTube star MrBeast (born Jimmy Donaldson), who in the past has said the names of popular YouTubers PewDiePie and Logan Paul 100,000 times. Donaldson is also famous for his outlandish challenges, like Ubering in exotic cars and giving them to the passengers at the end of the ride.

Similarly, Caherly recently gave Amazon gift cards to many of his fans. He is now crowdsourcing ideas for his next social media challenge.