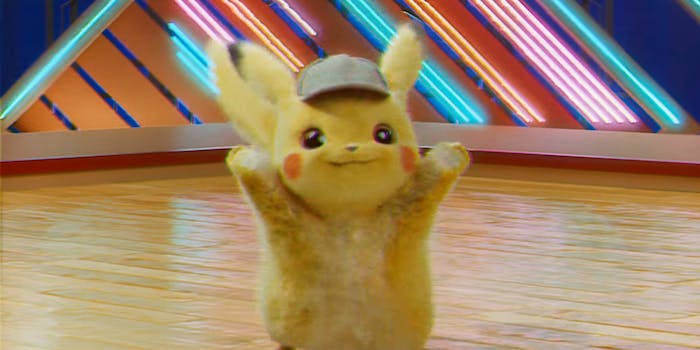 Detective Pikachu’s dancing goes with everything

Ryan Reynolds' posted some great footage, and everyone's turning it into memes.

Detective Pikachu is almost here, and Pokémon fans are being treated to a feature-length meme.

It turns out the “leak” was just a cleverly done marketing stunt by Warner Bros. and the Detective Pikachu team. The video starts off convincingly enough with a short montage of actor Justice Smith walking around the pokémon-filled Ryme City but quickly segues into an hour-and-a-half of Pikachu dancing his heart out to an ’80s-esque synth beat.

It’s a fun little homage to that infamous 1988 Crystal Light National Aerobics Championship dance, but now folks are applying it to darn near anything with a 4/4 beat.

The hero the world needs….. I'm impressed how well this song works with Pikachu dancing.

Excellent job trolling the internet #DetectivePikachu that was very impressive and I loved every second of it pic.twitter.com/sOlTAA8n2k

Of course, there’s this gem that riffs on another ’80s classic: “Take on Me” by A-ha.

I hate that this is the music I hear when I see pikachu dancing pic.twitter.com/sZYQ3Zq9An

There’s also just a ton of western and Korean pop music being layered over Pikachu, and we’re not complaining.

The clip of Detective Pikachu dancing can literally go well with any 80's pop song and I love it. pic.twitter.com/XgUPYRKIPr

the leak video of Detective Pikachu shows the most exciting scene of the movie pic.twitter.com/RfYSMEo5Xv

I hate that this is the music I hear when I see pikachu dancing pic.twitter.com/SvoJXkAZo0

Here’s Pikachu dancing to the theme song from Devil May Cry 5.

pikachu! the only center ever! yalls faves could never! pic.twitter.com/ISw6cKemiy

the music i heard when i see pikachu dancing pic.twitter.com/89ckh0O0Kb

Dancing Pikachu Taking over for the 99 and the 2000. pic.twitter.com/WqD7piWVPC

Detective Pikachu is out on Thursday so make sure to check out Daily Dot’s review, plus our favorite Pokémon memes. If you’re a Pokémon Go fan, you also won’t want to miss out on the movie tie-in event.