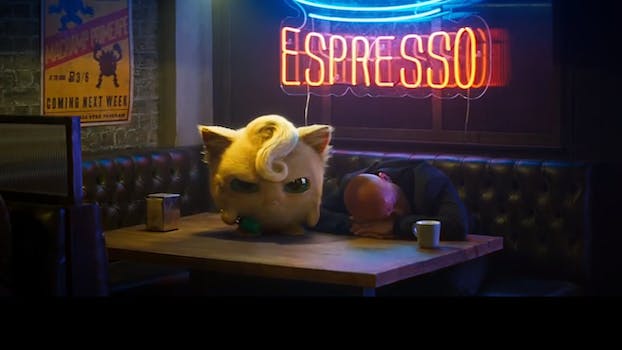 The angry Jigglypuff in ‘Detective Pikachu’ is already a meme

Fans finally got their first look at the live-action Pokémon movie, Pokemon Detective Pikachu, and Monday’s trailer has blown up the internet and offered up several memes.

Starring Ryan Reynolds as everyone’s favorite electric mouse detective, it follows a talking Pikachu that’s helping a young man named Tim Goodman get to the bottom of where his private eye father has disappeared to.

As expected, people have had varied reactions to the other Pokémon in the upcoming movie, and many aren’t taking too kindly to them. Some describe them as “nightmare fuel,” or “unforgivable,” like the angry Jigglypuff seen in a coffee shop in the movie’s first full-length trailer.

But many are digging it, too.

Funnily enough, this mad little pink puffball is, as Twitter user @Isirikul sums it up, a mood. Many are embracing the weirdly realistic Jigglypuff that seems mad.

Jigglypuff is a Goddamn MOOD. pic.twitter.com/jSoEWfohjj

Jigglypuff did it, case closed. pic.twitter.com/f3KKF4By1V

Someone: "SING AFRICA BY TOTO!"

This is not Jigglypuff, this is an 80-year-old lady who yells at the caretaker in the nursing home insisting that her glam rock career can still take off pic.twitter.com/NK3N944Pbt

People love to meme this little furry Jigglypuff up—and the film isn’t out until 2019.

The years have not been kind to lounge singer jigglypuff pic.twitter.com/nxtzMkuK54

It’s even bringing back some of our favorite memes, like this ol’ standby from A Star is Born, the “take another look at you” meme that we know and love. Here Jigglypuff sings alongside Bradley Cooper.

Let’s be honest—the movie doesn’t look great. But at the very least, it’s delivering in terms of hot and fresh new meme content. This Jigglypuff is still just as creepy and weird as the rest of the CG monsters, but it’s at least providing plenty of laughs.

Until the film hits theaters, you’ve got plenty of time to play the original 3DS game and crack the case.