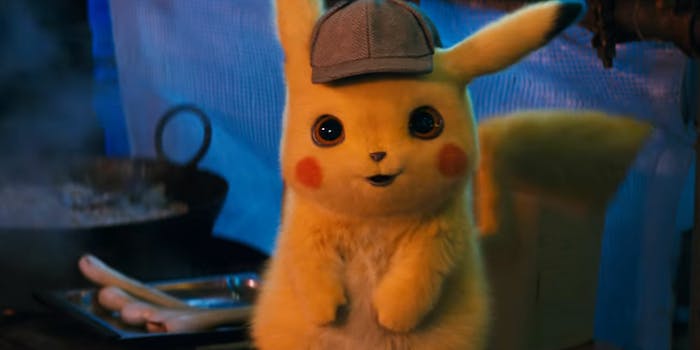 Alex Jones as Pikachu is a thing.

Monday’s release of the trailer for Detective Pikachu, starring Ryan Reynolds as everyone’s favorite fictitious rodent, was met with mixed reactions online. Based on a 2016 Nintendo DS game, the trailer teases a film that just might manage to pull off a video game adaptation with the right combination of humor and intrigue.

Mid-afternoon on Monday, hours after the trailer dropped, Twitter user @NoShape_  posted his own take on the popular teaser, with Danny DeVito as Pikachu.

His tweet was quickly followed by a YouTuber who goes by Dolan Dark, who Tuesday uploaded a different version of the trailer, in which Pikachu is voiced by far-right conspiracy theorist Alex Jones.

Weirdly, they were both kind of spot-on.

Danny Devito is Detective Pikachu in some better timeline, and this is what it sounds like: pic.twitter.com/g029RoGPIh

Pikachu rambles aimlessly in the DeVito version of the trailer, using clips from FX’s It’s Always Sunny In Philadelphia, in which DeVito plays Frank Reynolds, the reprehensible father of Dee and Dennis.

“I need some trash to plug up the cut,” DeVit-achu explains to a baffled Tim Goodman, played by Justice Smith, before launching into a tirade on eating cat food that has to be experienced to be understood. @NoShape_ manages to keep Pikachu’s movements and mouth surprisingly synched with DeVito’s off-kilter delivery.

“I’m animated, I’m a throwback, I’m here,” an enraged sounding Pikachu rants at Goodman. “I’m an explorer. I don’t like them putting chemicals in the water that turn the friggin’ frogs gay!”

“I like women, not men and if I liked men I’d be proud of it,” Pikachu growls at Mister Mime toward the end of the 44-second trailer. “I’d have a lot of them, but I ain’t never been in bed with no man.”