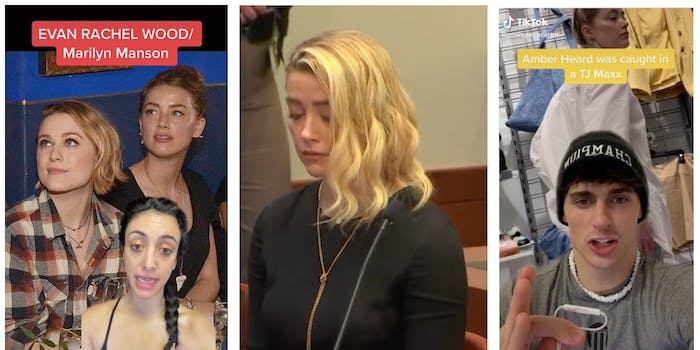 After Depp-Heard trial, creators try to keep up the momentum

The next celebrity case should not be treated the same as the Depp-Heard trial. But it already is.

The Johnny Depp-Amber Heard defamation trial ended on June 1, with the jury awarding Depp $10.35 million and Heard $2 million. A few days later, Depp joined TikTok and posted a “thank you” video for his fans, amassing more than 15 million followers. Heard will allegedly appeal the verdict, and she has been attempting to point out just how weird it all was.

TikToker and writer Rayne Fisher-Quann expanded on what it all means in a recent newsletter: “With terrifying inertia, the trial has become a vicious battleground for a maelstrom of cultural forces: the hatred of women, the fear for men, the obsessive consumption of real-life tragedy, the aftershock of the MeToo movement, the influencer attention economy.”

When I first started looking into the pro-Depp content on TikTok in April, I thought it was the fandom once again mobilizing to support the actor, as it did during a 2020 UK trial in which the judge ruled Depp did abuse Heard. But as this trial wore on, it became very clear it wasn’t about fandom.

Because nearly a month later, people are still fixated on Heard: Images of her allegedly shopping at TJ Maxx were circulated as people made jokes about her being broke and their videos got thousands of views. The hashtag #amberheardtjmaxx has more than 50,000 views.

As the Washington Post reported, pro-Depp, anti-Heard content was very lucrative for some creators over the last two months, and it signals a shift: “The trial offered a potential glimpse into the future of media,” wrote Taylor Lorenz, “where content creators serve as the personalities breaking news to an increasing number of viewers—and, in turn, define the online narrative around major events.” Much of YouTube became a frantic stream of misleading content during the trial, and the company did little to curb it.

What creators are covering after the Depp-Heard trial

Some of those dedicated TikTok accounts are still posting Depp and Heard content, but creators have started looking at other cases to keep up the momentum, like the pending Brad Pitt and Angelina Jolie winery lawsuit. In the comments of bigger creator accounts like Shannon Hill, who has more than 392,000 followers, people are mostly siding with Jolie. In one video from early June about the suit possibly being the “next big story” is this chilling comment: “Ok but can we all start talking about roe vs wade again. This cannot be overturned.”

Megan Thee Stallion recently opened up about what she experienced after Tory Lanez allegedly shot her foot in 2020, ahead of his September trial for assault. She told Rolling Stone people online have attempted to discredit her version of events as well as wish death on her for accusing Lanez. “In some kind of way I became the villain,” she said. You can find videos on TikTok of people (mostly men) poking holes in the “timeline” of events around the shooting or calling her a liar.

And then there’s the upcoming trial of Marilyn Manson, who sued accuser Evan Rachel Wood for defamation earlier this year. Those focused on that case on TikTok mostly seem to believe Manson is guilty, as there are multiple accusers in his case. Many of the comments on Hill’s TikTok about doing a “deep dive” on the Manson case are “Team Evan,” but there are also quite a few people claiming they need to “see all the evidence.”

As Choire Sicha wrote for New York earlier this month, this “new media class” of influencers “post fast and often—sometimes hundreds of times a day—and don’t have to pretend they’re objective. In fact, they’ve shown that news consumers are delighted when they pick sides.” A closer look at TikTok (and Twitter and YouTube) shows that there are already creators (and an audience) primed to pick sides.

One recent video from TikTok account 1_pop_culture_1, who has more than 55,000 followers, makes the baseless claim that Wood and Heard “plotted together” to “take down” Manson and Depp, respectively. A handful of people agree in the comments: “YEP!! All planned!!” The TikTok has more than 20,000 views.

“I know of Manson but I never liked his music or ever dug his demon schtick so it was easier to come at the story neutrally,” 1_pop_culture_1 tells the Daily Dot via email. “I am leaning right now to Manson but it’s strictly based on evidence.”

Asked about that specific TikTok, and whether a claim like that is testing out what people want to engage with, he says: “I genuinely feel in my heart I’ve stumbled upon the largest abuse hoax in the history of our society. These two women genuinely thought that they would just be believed hands down, no questions asked.”

“The largest abuse hoax in the history of our society” certainly reads like a clickable YouTube title. Of course, the rabid engagement around Depp-Heard content is influencing what creators cover next.

“As far as posting for engagement or clicks, I think that’s just this business,” he says. “You gotta know what the people wanna read, watch, or listen to.”

That’s spread beyond TikTok to spaces that were previously not really hosting this kind of content: A made-up courtroom conversation between Depp and Heard went viral on LinkedIn earlier this month, but it was ultimately just a promotion for one person’s brand.

The mobilization of misinfo on TikTok will clearly have consequences for other high-profile trials as well as much more impactful events, like the midterms and 2024 election. It is already having an alarming effect on non-famous people’s lives.