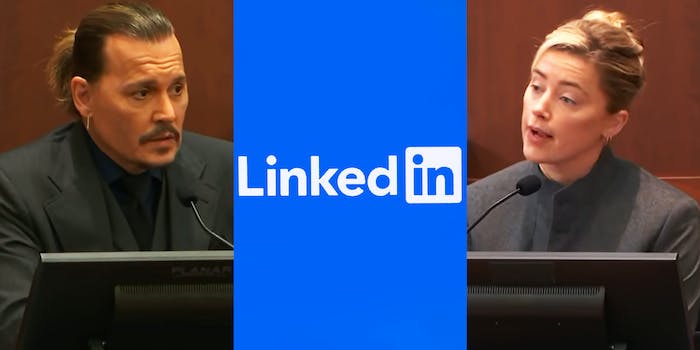 ‘This is so gross’: Fake ‘final trial convo’ between Amber Heard and Johnny Depp goes viral on LinkedIn

The verdict for the rial between Johnny Depp and Amber Heard was handed down two weeks ago, but Twitter entrepreneurs and LinkedIn influencers are still using the trial’s salacious nature and virality to get eyes on their posts.

A LinkedIn post of a fake transcript between Heard and Depp used as an advertisement has particularly drawn ire. Shawn Barnes, whose LinkedIn profile says he works at GTN Technical Staffing and Consulting as a recruiter, made the post on June 13.

Barnes’ “bombshell” transcript says that Heard asked Depp if he still loved her at the end of the trial. In response, Depp says “Amber, this might be the last time we ever speak, so please listen to me very carefully.”

“If you know of a Data Analyst with experience in Python, SQL, A/B testing and Excel, you absolutely need to call Shawn Barnes with GTN Technical Staffing,” Barnes wrote that Depp told Heard. “He is the best!”

Twitter user Ben Muschol tweeted about Barnes’ post on Tuesday. Alongside a screenshot of it, he wrote “this is so gross.”

“Dont even know what to say. This has 10s of thousands of likes on Linkedin,” Muschol tweeted.

The “final convo” is only the latest joke that involves Depp and Heard’s trial. The situation has been made into memes and referenced by many popular social media accounts since the trial began in mid-April.

The internet’s reactions to the trial have been regarded as disturbing by some: NBC’s Patricia Grisafi called memes she’d seen “grotesque,” and the Canadian Broadcasting Corporation reported that jokes about the trial are “meme-ification of domestic violence” and have real-life consequences.

Barnes’ post seems to be an offshoot of another advertisement posted on Twitter on Sunday. Matt Salit, a realtor, tweeted that the “final trial convo” followed a similar script, except that Depp tells Heard at the end that if she ever needs a realtor, call “#MattSalit.”

Heard: Johnny. Turn around and look at me

Heard: I have something to talk to you about.

Heard: Do you still love me?

Depp: This might be the last time we speak, so listen to me. If you ever need a #realtor, call Matt Salit

As to whether or not he finds the “final convo” insensitive, Salit told the Daily Dot that “when you have a case of someone pooping on someone’s pillow, it is trivial to itself.”

Others caught on to Salit and Barnes’ trend. Twitch streamer Buck, who posts about sports, used the trend format in a series of three tweets on Tuesday to encourage viewers of his tweet to subscribe to his Twitch channel.

Heard: Do you still love me, Johnny?

Depp (lifts his head, looks her straight in the eyes, and says): Amber, this might be the last time we ever speak, so please listen to me very carefully. SUB TO BUCK, IT’S the THING TO DO!!! pic.twitter.com/znNjk7H0PT

A gaming YouTuber also used it to promote his YouTube channel, and a car salesman posted it alongside his contact information advertising his vehicles.

The Daily Dot reached out to Barnes via phone.