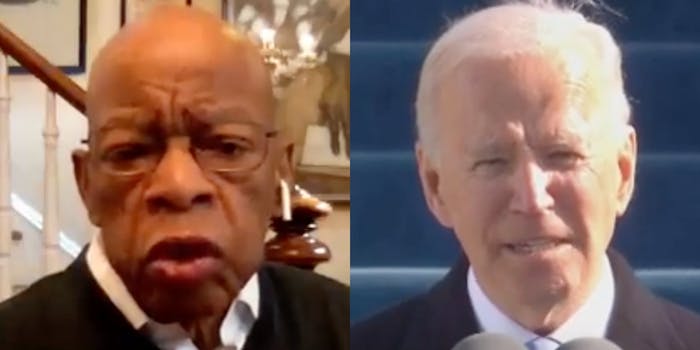 Cringy ‘Democrats in heaven’ memes are here to ruin your day

People are doing it again.

People are doing it again. On the morning of Joe Biden and Kamala Harris’ inauguration, people created those extremely cringy and ridiculous “Ruthkanda“-like photo edits. However, this time, these people made grossly unnecessary photo edits with notable Democrats in heaven, peering down with gleaming approval.

If you remember the sometimes-moving (or sometimes-wild) tributes for Ruth Bader Ginsburg, these are in the same vein and often include the late Supreme Court justice.

“Democrats in heaven” got a boost around the election in November. Dan Rather tweeted, “Am I the only one picturing John Lewis and John McCain watching the returns together?” To that message, someone replied with problematic cartoon visualizations that water-down the rich legacies of many Black leaders into cartoon characters.

But it’s started right back up in the last couple of days.

Actress Fran Drescher posted a rendering, with late Democrat (or Democrat-leaning) people including Ruth Bader Ginsburg, Elijah Cummings, John Lewis smiling down on both Biden and Harris, as they embrace. The curious addition is that of John McCain.

Another one shows Ginsburg, Lewis, and (again) McCain, together in a strange edit.

Some of the “Democrats in heaven” ideas have been well done and appropriate, such as a rendering completed by illustrator Mike Luckovich, which shows a triumphant John Lewis celebrating critical Senate wins for Rev. Ralph Warnock and Jon Ossoff.