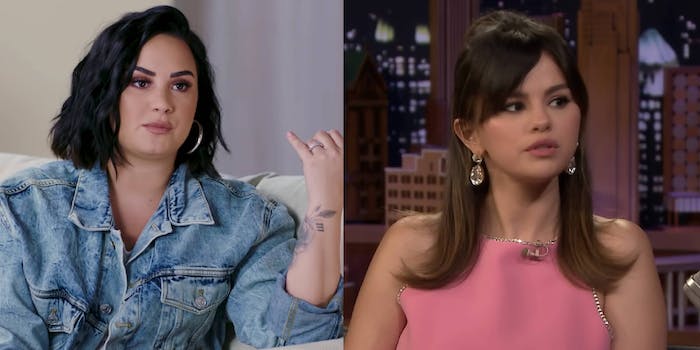 Demi Lovato accused of having an anti-Selena Gomez finsta

Instagram users say Lovato was 'exposed' when she accidentally turned on Instagram Live on her alleged finsta.

Celebrities, they’re just like us. And apparently they even have finstas. Demi Lovato has been accused of using a fake Instagram account, or finsta, to hate on Selena Gomez.

The hashtag #demilovatoisoverparty started trending on Twitter after users shared screenshots of her finsta and made countless jokes.

One Gomez stan even made a thread detailing all the times Lovato “betrayed” Gomez.

Even though many believe the account belongs to Lovato, fans quickly came to Lovato’s defense and said the screenshots are fake.

Some of Lovato’s close friends have also said the account is fake.

“The world is in shambles and people really tryna start stan wars,” KITTENS tweeted. “U kiddos gotta take this time to do some soul searching. Find a purpose outside of obsessing over other peoples lives and being psychos.”

None of the screenshots have been confirmed as real. One of the videos circulating shows the @traumagirl4eva private account from someone who isn’t a follower. The screen recording then shows the “follower list,” but follower lists aren’t available for non-followers to see.

Neither Lovato nor Gomez have publicly commented on the matter.