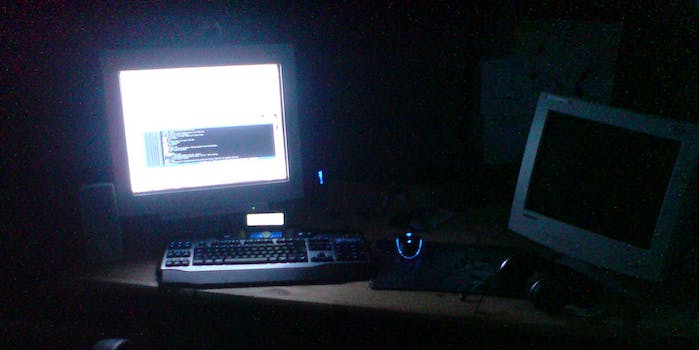 Searching for a hitman in the Deep Web

Empowered by encrypted email programs and Bitcoin, hitmen (and -women) are able to advertise their services with seeming impunity.

With the arrest of alleged Silk Road mastermind Ross Ulbricht in San Francisco last week, there’s been a renewed spotlight on the shadowy network of the Deep Web, the sites accessible only through the encrypted Tor network. Granted the cover of anonymity, users there engage in activities ranging from expressing political dissent to selling massive amounts of marijuana. While most of the attention has been paid to the trafficking of illegal narcotics, even a quick tour through the Deep Web shows the prevalence of another type of clandestine service: contract killers.

These sites, with URLs consisting of random sequences of alphanumeric characters, can’t be viewed with traditional Web browsers. A Tor browser, which routes users’ information through a system of nodes around the world rendering people using the service effectively anonymous, is required to obtain access. However, from there, finding someone with a certain moral flexibility is as easy as searching “assassin” or “hitman” on one of the many Deep Web forums or search engines.

“Doing this over the TOR network is probably the safest way to do it at all,” writes the operator of Unfriendly Solution on his or her site.

“I have gained endless experience(s) in this [sic] 7 years. It has changed me a lot. I don’t have any empathy for humans anymore,” Unfriendly Solution boasts. “This makes me the perfect professional for taking care of your problems and makes me better than other hitmen. If you pay enough I’ll do ANYTHING to the desired victim. If I say anything I mean anything.”

Unfriendly Solution only accepts payment in Bitcoin, the standard currency for Deep Web transactions. Bitcoins can be transferred electronically between computers or smartphones without an intermediary institution—making it a safe unit of exchange for people who don’t want their financial activities monitored.

“It is of mutual interest to make everything anonymous,” explains a post on the site of C’thulhu Resume, another murder-for-hire group. “It means we don’t know you and you don’t know us. We can’t send you to prison, and you can’t send us to prison.”

Claiming to be an “organized criminal group, former soldiers and mercenaries from the [French Foreign Legion], highly-skilled, with military experience of more than five years,” C’thulhu Resume takes its name from a series of horror stories by fantasy writer H. P. Lovecraft. Even in a corner of the Internet that revels in badass machismo, there’s still room for a nod to nerd culture. 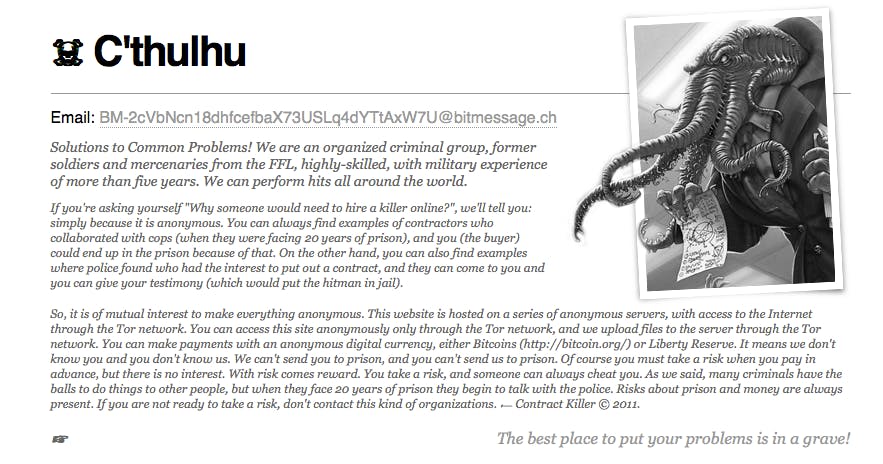 One of the strangest facets of the entire ecosystem of Deep Web murder-for-hire sites is in the way that many of them employ marketing techniques considered fairly standard for sites selling legal products. For example, C’thulhu Resume advertises itself with the mock cheery slogan: “The best place to put your problems is in a grave!”

Hitman Network, which claims to be a trio of contract killers working in the United States, Canada, and the European Union, offers people a commission for referring their friends. “Tell others about this shop, and earn 1% from every purchase they will make,” reads a message on the site.

Unlike some of the other services, which hold up their lack of ethical considerations as a selling point, Hitman Network does draw a line between what it will and will not do: “no children under 16 and no top 10 politicians.” 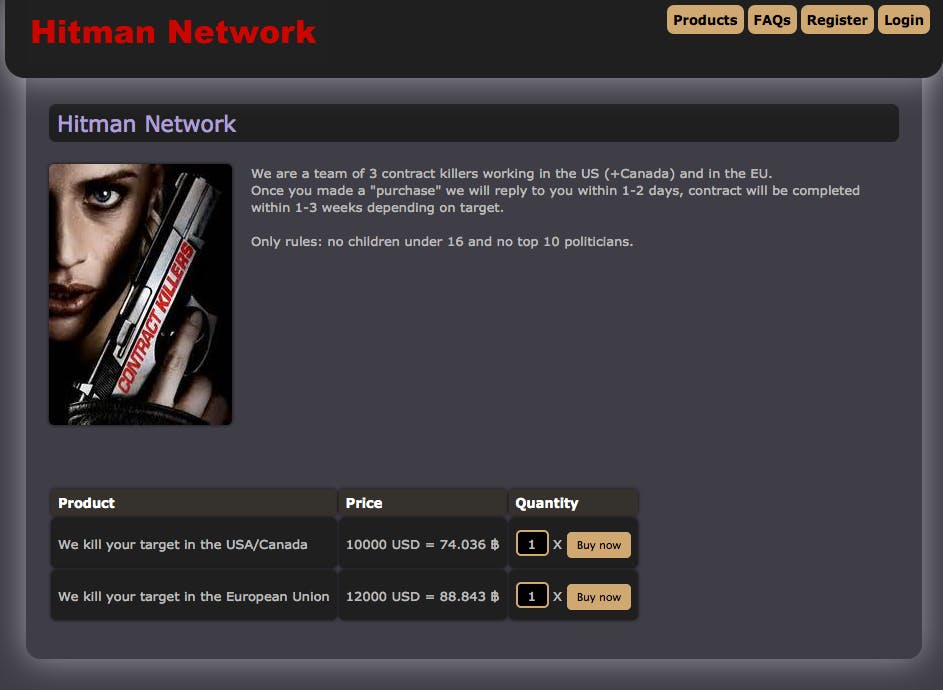 Quite possibly the strangest murder-for-hire Deep Web site is Assassination Market, which bills itself as a system for crowdfunding assassinations. It’s like Kickstarter, but for murder.

The system works like this: The name of a target is added to Assassination Market’s list and the site’s users can add bitcoins to a pool of funds associated with that individual. People can place predictions on when the target will die and whoever makes the correct prediction takes the pot home. The assumption here is that at least some of the people making said predictions will actually carry out the hit at the prescribed time to collect their winnings.

The site’s creator, who goes by the name Kuwabatake Sanjuro—the moniker taken by the nameless wandering samurai in the movie Yojimbo—defends the Assassination Market in a FAQ that functions as the enterprise’s manifesto.

“Killing is in most cases wrong, yes. However, as this is an inevitable direction in the technological evolution, I would rather see it in the hands of me than somebody else,” writes Sanjuro. “By providing it cheaply and accurately I hope that more immoral alternatives won’t be profitable or trusted enough. This should primarily be a tool for retribution. When someone uses the law against you and/or infringe [sic] upon your negative rights to life, liberty, property, trade or the pursuit of happiness, you may now, in a safe manner from the comfort of your living room, lower their life-expectancy in return.”

There are currently five people on the site’s list, all of whom are major public figures. Sanjuro insists he only allows people on the list for “good reason,” noting that “bad reasons include doctors for performing abortions and Justin Bieber for making annoying music.”

It’s unclear precisely how many of these sites are the real deal and how many are someone engaging in a fantasy they have no intention of actually carrying out. Many in the Deep Web community hold the opinion that most sites in advertising contract killing services fall squarely into the latter category, or are at least pulling a fast one on buyers who should probably know better. A conversation captured by WeirderWeb between a prospective assassin and a prospective client on the anonymous forum Underground Message Board 2.0 last year seemed to show the self-proclaimed hitman to be something less than a cold-blooded killer.

However, there’s ample evidence people deeply immersed in the upper echelons of the Deep Web were comfortable taking out hits online.

When the Department of Justice released its charges against Ulbricht, one detail of the government’s case really jumped out. Allegedly, Ulbricht hired hitmen to kill two people—a member of the site who was extorting him and an employee he believed might reveal his identity  to law enforcement.

Even though, at least in the blackmail case, there’s no concrete evidence a hit was actually carried out based on police records, the incidents (if real) would seem to suggest that Ulbricht was confident it could be done in the first place.

Sites offering contract killing aren’t restricted to the Internet’s dark, anonymous underbelly. It’s possible to just type hire-a-killer.com into any standard browser and book a hit. (Note: Please don’t do actually this). They take credit cards (sorry, not American Express). Earlier this year an Iowa woman was arrested for attempting to solicit a hit on her father using someone she found on Craigslist.

It isn’t only the (sometimes only implicit) anonymity provided by the Internet that potentially makes hiring a contract killer online more attractive than doing so face-to-face.

“In most cases, solicitors will not or can not conceive any notion of why they share in the culpability of the murder or attempted murder,” write authors Robert Hanser, Walonda Wallace, and Kaine Jones in an article entitled “Murder for Hire: Assassination and Contract Killings” in the book Organized Crime: From Tracking to Terrorism. “Often the solicitor’s … rationale is the argument that he or she did not physical commit the act and therefore is not culpable. … However, solicitors do not see themselves as murderers. Rather, they see themselves as normal people making a business deal and do not feel compelled to take responsibility for their actions.”

Following this logic, by removing themselves from any direct contact with the act’s ultimate perpetrator, it’s possible employers feel a greater moral distance from the crime as well as a greater physical one.

“In the eyes of the law, though,” add the article’s authors, “the solicitor is just as bad as the contract killer.