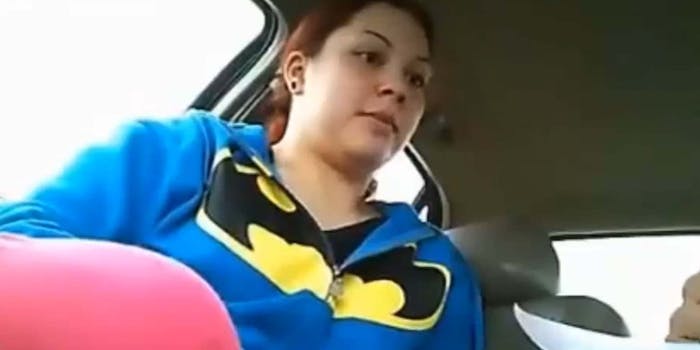 Killing your husband is easier than divorce, except when your hitman is a cop

At first the “little business” under discussion when 21-year-old Julia Merfeld enters a car and politely shakes hands with an unknown man isn’t quite clear. But as this video continues, it quickly becomes very clear that the man appears to be a hitman, and that “JC,” as he calls her, isn’t there to discuss stock options.

Merfeld’s “hitman” was an undercover cop, who filmed two meetings with her in which she laughingly discusses how she’d like her husband, 27-year-old Jake, to be killed. Merfeld has since pled guilty to felony charges of soliciting, and awaits a July 30 sentencing. In the video, Merfeld matter-of-factly and cheerfully discusses her husband’s murder as if it were just another chore she had to take care of that week.

Merfeld’s motivation seems to be her husband’s $400,000 insurance policy, out of which she plans to pay the hitman $50,000 after the act.

Merfeld has her priorities firmly in order. Upmost is her concern for the friend she says is eager to move in after her husband’s death; she worries that, if the hitman makes the murder look like a break-in, her friend might be afraid to move in.  She’s also concerned with the house not getting “messy.” She adds that she’d like her husband to suffer as little pain as possible, but by that point in the 9-minute video, the bouncy redhead wearing a Batman hoodie hardly seems like the best judge of what “painless” is.

After all, she says, she’d rather kill him than break his heart.

Merfeld’s plot might still be underway if she hadn’t singled out Carlos Ramos, a 30-year-old busboy at the restaurant where Merfeld worked, as the perfect man to carry out her plan. Instead, Ramos, an ex-con trying to stay on the right side of the law, alerted authorities, who set up Merfeld’s meeting with the undercover detective.

“She couldn’t divorce him because she said it would be too hard to leave,” Ramos told Michigan Live, “but that kind of logic didn’t make sense to me.”

It didn’t make sense to the courts either. At her sentencing at the end of the month, Merfeld could face life in prison.