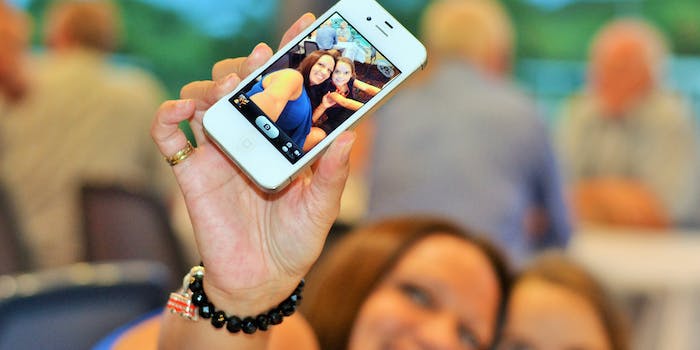 Debunking the viral GIF of an unlucky slip-and-fall selfie

Was a selfie really to blame for this man's hilarious yet clusmy fall?

The popular millennial past time has been blamed for the death of a family vacationing in Portugal who stepped too far back over a cliff trying to fit into frame, and it has endured harsh criticism because of teens snapping them at funerals and at concentration camps. But this time, it doesn’t seem like a selfie is the culprit.

On Sunday, a video surfaced on YouTube that showed a man in the background of news footage slipping and falling into the water while attempting to take a photo. Though many were quick to decry a selfie as the culprit for the hilarious-yet-clumsy misstep, let’s dive into this case CSI: Selfie style.

The first telltale sign this is a dude just trying to sneak a pic and not a selfie is the gaze. The man’s body language appears to be fixed on the news crew, not his phone. If he was indeed snapping a selfie with a forward-facing camera, he would be concentrated on the optimal framing and lighting instead. Finally, we have the angle he’s holding the phone. If this poor sap was trying to take a photo of himself, his arms would be holding the phone up higher. A selfie taken with the phone outstretched in front of you leads to the unwanted and unfortunate double chin.

Another selfie debunked, but this man is sadly no less wet for it. Let’s just hope his phone had a waterproof case.