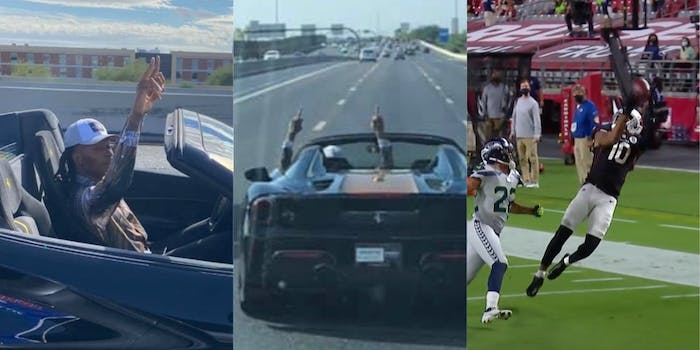 DeAndre Hopkins accused of flipping-off Trump stans in his Ferrari

Arizona Cardinals wide receiver DeAndre Hopkins had time before his game on Sunday against the Seattle Seahawks. As he drove past a full caravan of President Donald Trump supporters on Arizona’s I-10 highway, the all-pro apparently gave them two middle fingers as he drove by in his Ferrari.

Twitter exploded with photos of the Clemson alum, with a few Trump supporters accusing the NFL star of recklessly driving his Ferrari alongside the caravan by weaving in and out of the line.

One woman decided to call Hopkins a “TURD.”

However, many people either became Hopkins fans or solidified their fandom after his alleged act.

Arizona’s Department of Public Safety, the NFL, nor the Cardinals organization has released a statement about the incident. He would amass 103 yards on 10 catches to lead Arizona to an overtime win over the Seahawks.

The 28-year-old was traded to the Cardinals from the Houston Texans in March for oft-injured David Johnson and a future second-round pick.

Already one of the game’s elite talents, @AndrewLeezus is ready to take Hopkins’ greatness a step further.

He tweeted: “DeAndre Hopkins swerving his Ferrari in the middle of a Trump Train drive and flipping off MAGA people officially makes him the best WR in the game. Solidified his HOF status.”