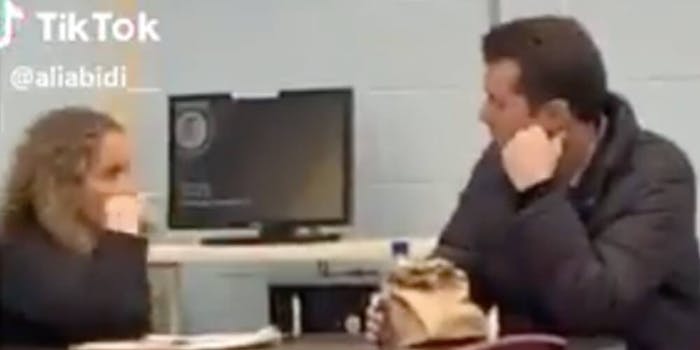 TikTok teen makes a video of his English teacher, the guy who sang ‘Story of a Girl’

Twitter users are crying a river and drowning the whole world.

A TikTok user made a video of his English teacher, who also sang lead on “Absolutely (Story of a Girl).” Turns out former Nine Days frontman John Hampson and the woman he wrote the song about are still together.

The TikTok video has caused some turmoil on Twitter. That’s because people who listened to the wildly popular song in the early 2000s are feeling old at seeing the rock idol living a quiet life as a regular dude in New York.

“Call The Hague, this is a generational war crime,” Katie Notopoulos tweeted.

Call The Hague, this is a generational war crime pic.twitter.com/yXAQyMALwL

The video shows Hampson talking to his wife in what looks like a school cafeteria. Then the video flips to a selfie video of the boy pointing to a screenshot of the song on YouTube.

“My english teacher use to be a singer and he wrote this song about his wife, who hes talking to in this vid,” @aliabidi_ wrote on his TikTok video.

Needless to say, Twitter users who had listened to the song about two decades ago were shocked.

we're old, he doesn't know how to point, it's tough all over

Hampson doesn’t try to hide his rock star past from his students. In fact, a YouTube video that was recently posted on Reddit shows him talking about his experience and singing the song to his class.

John Hampson of Nine Days (Story of a Girl) is now a middle school teacher. Student recorded this video of him performing for the class. from videos

Hampson talked about his teaching life in 2012 with Patch, a local media outlet in Wantagh-Seaford, New York. Teaching, he said, is not that different from being onstage.

“Whether I’m singing or teaching, I’m in front of an audience and it’s my job to hold that audience’s attention. I’m reading a room and making decisions on how to address that audience to inspire them,” Hampson told Patch. “It’s different tools with music and teaching, but the goal is the same.”