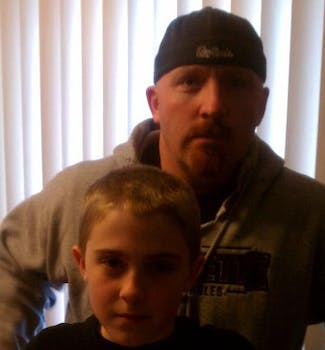 Matthew Bent shared the feeling of frustrated parents all over the world this week when he detailed how his son was targeted by a school bully.

Matthew Bent shared the feeling of frustrated parents all over the world this week when he detailed how his son was targeted by a school bully.

After taking his story to Facebook, where it’s been shared more than 357,000 times to date, Bent was able to sway school administrators into handling the situation.

Here’s Bent’s story, in his own words (originally posted in all caps):

Yesterday, my son was bodyslammed 3 times by a bully, the same bully that has been making my son’s school year a nightmare, including stealing a necklace I gave my son as a special gift for his first year of Little League. Last night, I called the cops to put a stop to this, and when the cop came over, he said the school police officer would handle the case. When I got a call today from the [River View Middle School] [Police School Liaison Officer], he told me that because my son voluntarily walked into the area that the bully was, that it was my son’s fault for going “into the lions den” and there was nothing he would do about it.

When I told the officer that this bully had been bullying my son all year, he said he only takes one issue at a time and the past was done, and the necklace was the bully’s because the bully was able to name a store where they sell them. The Kaukauna area schools is protecting bullies and ignoring their victims! Please share and send a message to every school district that protecting bullies and doing nothing about their actions is wrong!! My son has been bullied all school year by this group of thugs, and not 1 teacher, administrator, councillor or officer will do anything to make it stop, they only offer excuses and blame the victims!!! Please help me in the effort to stop bullying!!! 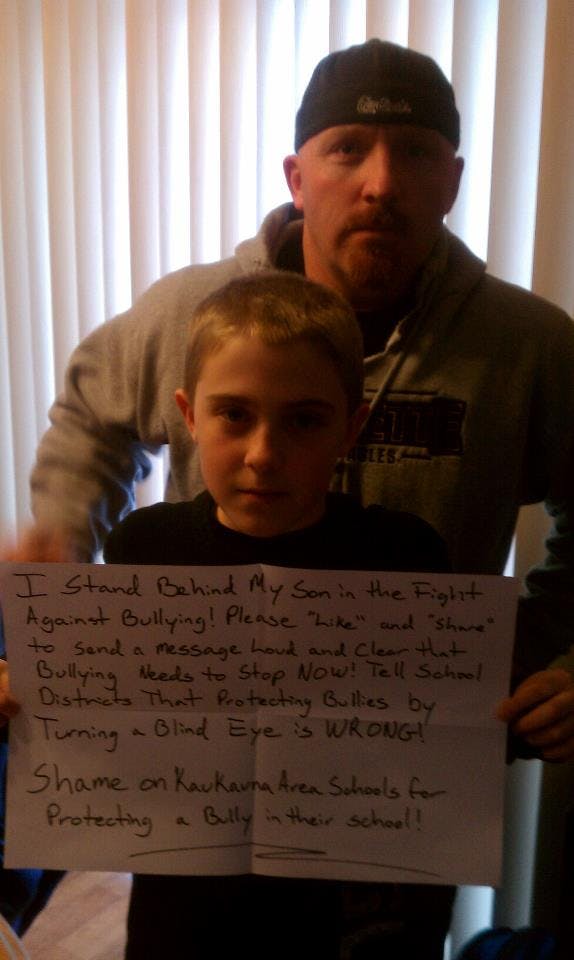 Bent, of Kaukauna, Wis., claimed the bodyslam incident took place in the school gymnasium, according to WBAY. He claimed he himself was bullied as a youngster. “It’s heart breaking and the hard part is hearing your son go through it.”

“Kaukauna Area School District does not protect bullies,” Superintendent Mark Duerwaechter said, according to WBAY. “We are committed to providing a safe and enjoyable place to work and to learn. Although, very difficult, we do look forward to working with the families that are involved in these situations that are unresolved.”

Duerwaechter countered Bent’s claim on where the incident happened, saying instead it took place in a classroom away from a teacher who was present. School officials told WBAY the alleged bully and victim were previously embroiled in name-calling incidents, though they didn’t say whether either student had been disciplined.

Duerwaechter has spoken to students and a teacher about the matter, and wants to talk with Bent. He claimed it was unfair to accuse the school and school district of protecting bullies and overlooking victims. He added the district follows up on every bullying report.

Police looked into the incident, but decided it was a school matter. No charges are expected.

Bent’s post struck a chord with a large number of people, and the issue of bullying is one that’s felt worldwide. Bullying comprises issues like a young boy being slammed by a peer. It’s seen in cases where teens pledge to harass others until the victim’s deaths. The plague might be encapsulated in a beatdown video shared for the world to see. Bullying is a curse that affects many of us, no matter where we might be.

Bent’s actions resonate far beyond his own son’s torment, and highlighting the issue led to a hundreds of comments. Bent said he never imagined his post would take off in the way it did, and was glad his post was able to help others.

He shared one story in particular on his Facebook profile, from a junior at a school in the same town. The student thanked Bent for posting his story, and explained they were a victim of theft at school that very same day with another girl regularly bullying them.

Thank you for taking a stand against this, because it’s something I’ve never been able to do for myself. Thank you for giving me the courage to stand up for myself. I never thought that I was worth enough to stand up for but you changed my mind about that. We’re all important in some way and we’re all equals. I needed a good pick me up after the day I had today and your story actually made my night a whole lot better. Thank you for standing up for what you believe in. It’s nice to see that there are still good people in the world and you just proved that one person really can make a difference. It’s so inspiring. Thank you for being an inspiration.

If nothing else, Bent might be able to help others open up and share their own stories of, as he put it, “a worldwide problem that needs to stop.”