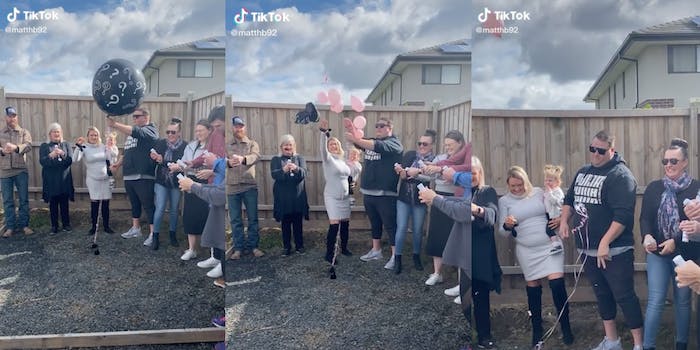 ‘I hope his daughter doesn’t see this when she’s older’: TikTok video of dad’s reaction to gender reveal has viewers outraged

'Why would he have that reaction?'

A video showing a father’s reaction at a gender reveal party has stirred both laughter and outrage after going viral on TikTok.

The footage, uploaded late in April by the user @matthb92, has since been viewed more than half a million times.

The man can be seen holding a large black balloon alongside a woman and a young girl, presumed to be his wife and infant daughter.

When the man and woman pop the balloon to find several smaller pink balloons inside, signifying that their next child will be a girl, the man responds with visible disappointment.

The father appears to be the only disappointed person in the clip as his wife, friends, and family celebrate the news.

TikTok users quickly began weighing in on the dad’s video, with many criticizing him for the negative reaction.

“I hope his daughter doesn’t see this when she’s older,” user @na_shoemaker_amber wrote. “He is lucky to even have kids. I wonder what the family said after they stopped recording.”

Others tried to sympathize with the man but ultimately couldn’t bring themselves to excuse his behavior.

“Why would he have that reaction? I can see hoping for a boy but to visibly be upset????” @kmfenna said. “As long as the baby and your wife is healthy then be happy.”

But some users ran to the man’s defense, arguing that it was perfectly normal for him to want a boy.

“People are so mean,” @karenbj1760 said. “He wanted a boy. It doesn’t mean he’s not going to love his daughter. Geez people.”

One user even stated that “gender disappointment” is a very real phenomenon for parents.

“Gender disappointment is real and he’s allowed to feel this way,” @becca_louise00 said. “Baby will be loved just the same.”

Another TikTok user went as far as to claim that she openly cried when she discovered she was having yet another boy.

“I cried when I found out I was having another boy,” @2pibblemama wrote. “Literally cired on the ultrasound table. Thankfully there was no video.”

The TikTok user who uploaded the video has not uploaded any others since. Even with the pushback, the gender reveal party was relatively tame compared to many which end in destruction and even death.