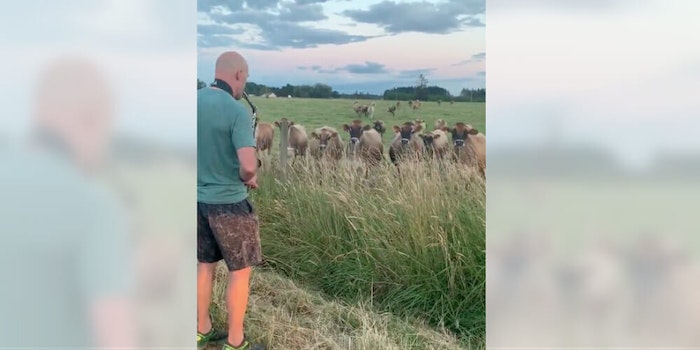 'He’s thrilled at how many people he is making happy.'

An audience is in absolute awe of this dad’s saxophone skills. An audience of cows, that is.

Erin Herrmann posted a two-part video of some pure dad content on Wednesday.

“My parents are such goofs they drove out to the backroads so my dad could play the cows the songs he’s been learning on the saxophone,” Erin wrote on Twitter.

my parents are such goofs they drove out to the backroads so my dad could play the cows the songs he’s been learning on the saxophone pt.1 pic.twitter.com/IHzgxtvo0N

Erin told the Daily Dot that her dad, Rick Herrmann, has been learning to play the saxophone–with help from the internet–for seven months now. The Herrmann family lives by a cow field and always makes sure to stop and say hi to Rick’s favorite animals.

“When he practices saxophone my dog hates it so much, she even chewed up his reeds,” Erin said. “My dad thought that maybe the cows would appreciate his music even if our dog doesn’t.”

“This was never his goal, it was my mom’s idea to film it,” Erin said.

Erin said her mom, Kym Herrmann, was the one who encouraged Rick to play for the cows.

“He’s thrilled at how many people he is making happy and just wants people to remember to look for the little moments of joy in life. You’re never too old,” Erin said.

People are definitely impressed with Rick’s ability to captivate such an unlikely audience.

Even the person next door got in on the action by shouting, “Tequila” in the background to make the tune complete.

Even though Rick is famous now, he will never forget his roots.

“He might play for them again in the future,” Erin said of her dad.