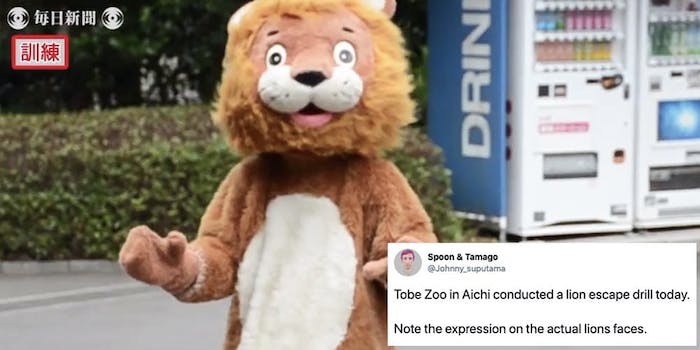 A human dresses up in a full-on lion costume and makes a run for it.

To prepare staffers for the event in which an animal escapes, some zoos in Japan conduct “drills” to simulate an emergency situation. And because it’s, well, Japan, naturally these drills are performed with someone dressed in a full-on animal costume.

On Saturday, Tobe Zoo can be seen performing an escaped lion drill in a video that made its rounds on Twitter.

In the video, shared by the Japanese news outlet Mainichi, staffers are seen setting up large nets to apprehend the grinning mascot, but the lion “attacks,” knocking one of them to the ground.

Eventually, the great beast is felled by what appears to be a tranquilizer dart and hauled into a van.

Needless to say, the real lions watching from their enclosure were decidedly not impressed.

Note the expression on the actual lions faces.
pic.twitter.com/azuJYQhLCw

The tweet quickly went viral, because–come on–real lions watching a fake lion get captured with some serious The Office reaction faces is obviously nothing short of comedy gold.

Others began sharing the video or weighing in with jokes and memes of their own.

"the hell they doing over there" https://t.co/IYBelvGqA5

Literally every single moment from this video is amazing https://t.co/gKIBiBpJ1F

One user weighed in with a possible downside to the zoo staff’s plan.

Are they teaching the lions how to not get caught 😂

Other videos of Japanese animal escapes then began surfacing, such as this monkey escape from the Kyoto Zoo. It’s apparently a ~thing~.

A zoo in Tokyo has this hilariously fake paper-mache rhinoceros.