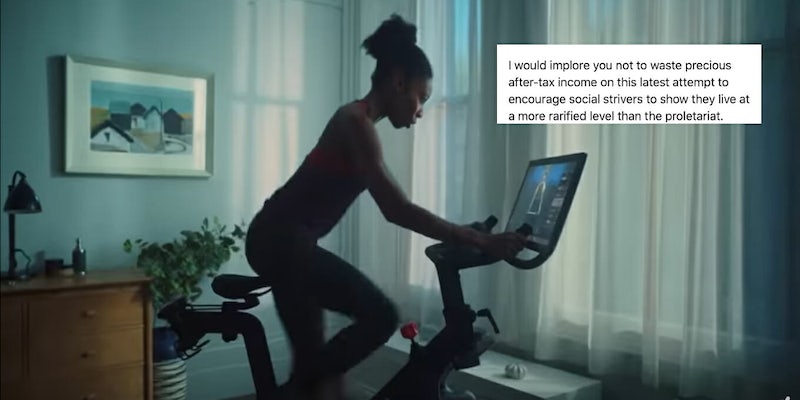 He called it a 'ridiculous amount of money.'

If you haven’t seen ads for the Peloton bike in the past few months, you’re one of the fortunate few.

The ridiculously self-obsessed Peloton bike ads that accost Facebook pages, commercial breaks, and online shopping sprees have already been roasted by the denizens of the web. But this week a disapproving dad that found virality through his disdain for these overpriced workout machines. All it took was a simple email to his daughter.

Clare O’Connor started seeing Peloton ads everywhere. According to an interview with BuzzFeed, curiosity drove O’Connor to Google the Peloton. Once she expressed interest, the ads took over. “I think because I Googled it, I’ve been deluged by ads on Instagram and Facebook, and… Well, they almost won this round,” she told BuzzFeed.

O’Connor discussed the idea with her mother, who approved, but then took the news to her father, who most certainly did not. Not long after the conversation, O’Connor received an email from her father, Colin, which outlined his disapproval of her potential purchase. He called it “a ridiculous amount of money for such a basic concept.”

“I had heard of Peloton,” Colin wrote. “And concluded that like the use of cocaine, it’s another way of God saying people have too much money.”

He went on to soundly roast the “preposterous” purchase. O’Connor couldn’t help but share his words on Twitter, adding that he would be a good choice if “I need to drag someone.” Twitter was quick to notice the relatable post.

It takes a special sort of something to invoke both God and Marxism as reasons not to buy something.

“It takes a special sort of something to invoke both God and Marxism as reasons not to buy something,” Jaye Wells wrote. She wasn’t the only one who was impressed.

I seriously want him to weigh in on all of my life decisions moving forward.

A lot of people just couldn’t get over the dad-ness of it all.

To be fair, ‘pretty penny’ is much more daddier

Pardon me but he said “precious” after tax income”.:) Even dadder!

Even Peloton couldn’t help but respond. “We would hire your dad for extreme motivational content tbh,” the company wrote via well-branded conciliatory tweet.

We would hire your dad for extreme motivational content tbh

O’Connor seems to have shifted her focus from purchasing a Peloton, thanks to her father’s choice lecturing skills. No word yet on whether Dad plans to join Twitter.