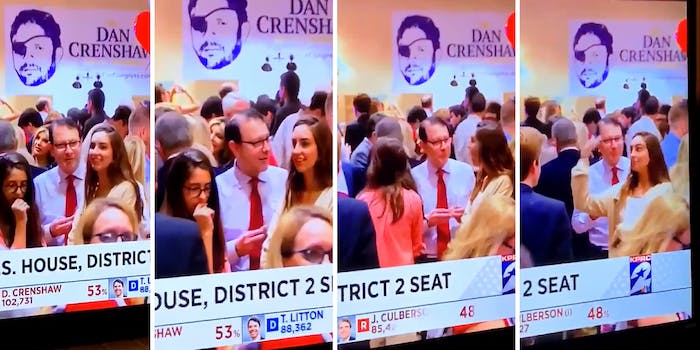 Ladies, we’ve been there: You’re enduring a conversation with a guy at a party and a comment sets you off. Twitter has been currently obsessed with trying to figure out exactly what happened last night at a watch party for Dan Crenshaw (R-TX), and what the guy in the red tie in the clip below said to the woman on his left, which made her and another woman scramble away from him.

Twitter user @gina_lolz sent out the call: “please find this girl I have to know what the guy said to her.”

People tried to figure out what might have been said, and the thread devolved into some juvenile jokes about pickup lines.

"Hi there, my favorite Star Trek movie is Insurrection."

I like to think that's her dad and he said a terribly embarrassing dad joke in front of her friend.

The dad connection is it, however: In a longer clip from Houston’s KHOU 11, the man can be seen in the background at around the 1:11 mark, standing behind the reporter’s right shoulder. He’s standing with the two women in the initial clip and a young boy.

After hours of speculation and sex jokes, the woman in white, Ellie Delgado, came forward and confirmed that it is indeed her dad and he was “talking about a woman he wants to date.” She also tweeted out the video and said, “It’s just my dad… chill.”

Crenshaw, a veteran and former Navy SEAL, won the race for Texas’s 2nd congressional district, bouncing back after being the target of a Pete Davidson joke on SNL last weekend. In his victory speech he said he wasn’t really offended, but “we also like it when comedians are actually funny. You know? Let’s get back to that, right? Let’s get back to being funny.”