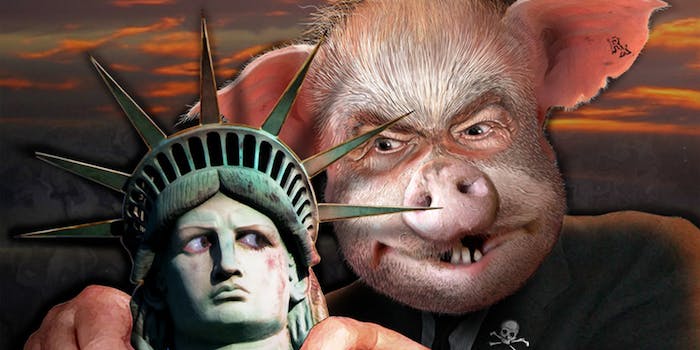 Corporations are people—and they have more rights than you

Women may not be the only victims.

Ever since Citizens United, the Supreme Court‘s 2010 decision allowing unlimited corporate and union spending on political issues, Americans have been debating whether, as Mitt Romney said, “Corporations are people, my friend.” Occupy Wall Street protestors decried the idea, late night comedians mocked it, and reform groups proposed amending the Constitution to eliminate it.

This week, however, the Supreme Court endorsed corporate personhood—holding that business firms have rights to religious freedom under federal law. Not only do corporations have rights, their rights are stronger than yours.

The question came to the Supreme Court in a challenge to regulations implementing President Obama‘s landmark health care law. Those regulations require employers with 50 or more employees to provide those employees with comprehensive health insurance, which must include certain forms of contraception. The contraception requirement was designed to protect the rights of women. Studies show that access to contraception has positive benefits for women’s education, income, mental health, and family stability.

Protecting women’s rights, according to the Court, isn’t a good enough reason for the government to force a business corporation, at least a privately held one like chain craft store Hobby Lobby, to include birth control in its insurance contrary to the business owner’s wishes.

At least that’s what the Supreme Court, in a 5-4 decision, held in Hobby Lobby. Federal statutes guaranteeing religious freedom to “persons” apply equally to closely held business corporations, and those corporations’ religious liberty is “substantially burdened” by having to provide their employees with contraception. So the rights of employees have to give way to the rights of the corporation.

The Court’s decision in Hobby Lobby isn’t a surprise. The Roberts Court has been largely hostile to the rights of women—allowing greater restrictions on abortion, restricting their ability to sue for workplace discrimination, and limiting the scope of family leave laws.

Meanwhile, the data show that the Roberts Court is the most business-friendly Supreme Court in nearly a century. Just as Citizens United expanded the rights of business corporations to speak about political issues—and, in the eyes of many, enabling them to drown out the voices of We the People—Hobby Lobby has given businesses another powerful tool to fight against regulation. Hobby Lobby’s religious rights enable the firm to ignore the voices of women who wish to enjoy the health benefits from controlling reproduction.

And women may not be the only victims. What religious rights will business corporations seek next?

The Court said that its decision wouldn’t necessarily mean that closely-held businesses could obtain exemptions from health care regulations mandating insurance coverage for vaccinations and blood transfusions. Yet the Court did grant those corporations a right to make such claims in court. If ensuring women’s control over reproduction—a constitutional right—isn’t a strong enough reason to limit the religious rights of Hobby Lobby, it’s not clear why these other laws won’t fall too.

LGBT people may be next. Remember a few months ago when Arizona almost adopted a controversial law that would have given business corporations a broad right to use religion to make claims for exemptions from the law? That proposed law was rightly seen as an attack on LGBT rights, as supporters insisted that business owners who object to same-sex marriage shouldn’t be forced to bake cakes, take pictures, or arrange the flowers at such ceremonies. After Hobby Lobby, now all business corporations have a right under federal law to claim religious-based exemptions to all sorts of laws—including laws prohibiting discrimination on the basis of sexual orientation.

To its credit, the Court’s majority recognized the trouble created by the ruling and suggested that firms would not be entitled to discriminate on the basis of race. “The Government has a compelling interest in providing an equal opportunity to participate in the workforce without regard to race,” the majority wrote.

If the Court’s ruling is read to permit challenges to laws barring discrimination against LGBT people, Hobby Lobby will be the Arizona law on steroids. It wouldn’t apply in one state but across the nation.

So while a business corporation can’t go to church, fast on Yom Kippur, or travel to Mecca for Ramadan, it can still go to court and, on the basis of religious freedom, demand to be exempted from the law that applies to everyone else. Today, women are the victim. Tomorrow, it could be LGBT people. Indeed, after Hobby Lobby, every person is at risk. Everyone, that is, except the corporate person, my friend.

Adam Winkler is Professor of Law at UCLA and an expert on constitutional law. His book Gunfight: The Battle over the Right to Bear Arms in America, will be published by W. W. Norton in September 2011. This article originally appeared on Huffington Post Gay Voices and was republished with permission.