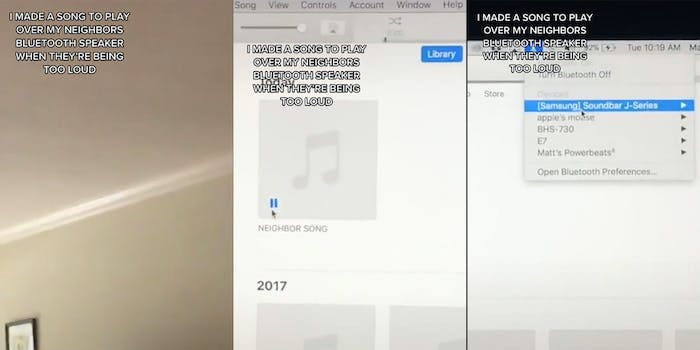 ‘I need this for my neighbors’: Comedian’s viral TikTok shows revenge on loud neighbors, sparks debate

'I made a song to play over my neighbors' Bluetooth speaker when they're being too loud.'

Comedian Matt O’Brien was troubled by neighbors playing loud music he could hear from inside his home. Then, he discovered he could connect to their Bluetooth speaker. He then recorded a song just for them, and it’s delighting TikTok to the tune of more than 10 million views in just two days.

O’Brien documented his discovery and revenge via his TikTok account. By way of explanation in the caption, he wrote, “I found a way to connect to my neighbors Bluetooth speaker” with the hashtags #loud, #neighbor, and #viral to drive the point home.

The video starts with a caption saying, “I made a song to play over my neighbors’ Bluetooth speaker when they’re being too loud.”

It then moves from a view of the ceiling, where hip-hop can be heard playing through the ceiling, to O’Brien’s computer. There, he clicks an audio file labeled “Neighbor Song,” that reappropriates “In the Hall of the Mountain King,” a familiar classical melody with both Halloween or Christmas associations. He sings to the tune, with a f-bomb-laden request to turn their music’s down as it’s loud.

After playing the song once for the camera, he then connects to that speaker via Bluetooth, and in the last part of the clip, the song comes through loud and clear on the neighbors’ speaker.

Many responding on TikTok were delighted by the gambit. One remarked in all caps, “OH MY GOD I NEED THIS FOR MY NEIGHBORS,” while another noted, “It’s funny because I can hear my neighbors’ music right now.”

Yet another had a very specific use in mind for the song, asking, “Please make this a sound or something to play for my neighbors when they wake my five-month-old up.”

Another person, apparently weary of apartment life, remarked, “The amount of people who think it’s okay to blast music in an apartment building is astounding. You can do it, sure, but I can also complain.”

Others expressed appreciation for the song itself, with one joking that it needs to go up on Spotify, and another saying, “This a bop! When’s it drop?”

Not everyone sided with O’Brien, though. As one person commented, “You clearly didn’t grow up in an apartment. If you did, you would hear it and move on with your day.”

The commenter concluded, “You don’t have real problems, so you create them.” That led to more than one person concluding that commenter is a loud neighbor.