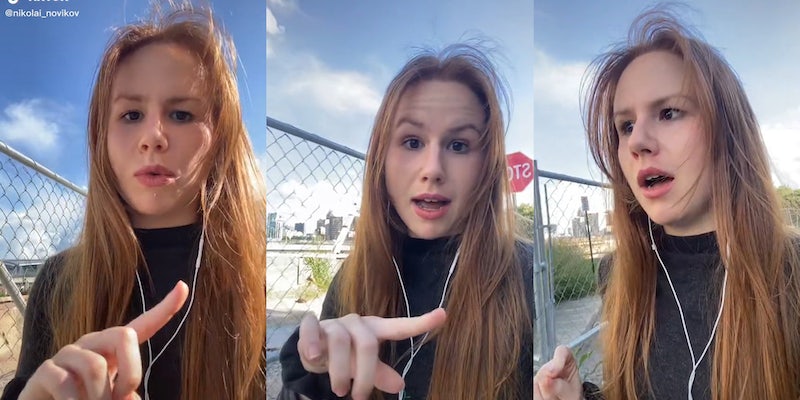 ‘Everyone at work falls in 1 of 2 categories’: TikToker claims co-workers are either ‘cops or friends,’ sparking debate

'Treat everyone as cop until they side-chat you to complain about others.'

Is it a good idea to view certain co-workers as untrustworthy undercover cops? According to this viral TikTok, the answer is a resounding Yes. With 280,000 views and counting, TikToker @nikolai_novikov explains that “everyone at work falls in one of two categories: cop or friend.”

She starts out by explaining some obvious examples, like your boss (a cop) versus a co-worker who compliments your outfits (friend). However, there are also some more insidious examples, like a “fun” colleague who drinks too much and seems welcoming when you first join the company but is popular with the boss. That guy is clearly an undercover cop, she claims. “Manager who is more behind on things than you are: FRIEND,” she added in the caption.

This TikTok is a succinct way to explain something that many people already believe to be true: Friendly workplaces can’t always be trusted.

In most office environments, there’s going to be some kind of professional hierarchy—and according to this “friend vs cop” advice, it’s a good idea to maintain some healthy paranoia about your workplace relationships.

@nikolai_novikov manager who is more behind on things than you are: FRIEND #fyp #foryoupage ♬ original sound – nikolai novikov

Commenters agreed, with some taking the advice one step further: “Assume everyone is cop.” Alternatively: “Treat everyone as cop until they side chat you to complain about others, then friend.”

“Undercover cop is the most important to find when you start,” advised one commenter, while another complained, “There’s a girl at my work who compliments my outfit and then asks ‘how’s your project going’ in front of everyone. Classic double-agent behavior.”

Others chimed in with different signs that someone’s a cop, including talking about golf (“the biggest red flag,” agreed @nikolai_novikov), or getting mad at other workers for taking bathroom breaks right after arriving.

These responses echo a lot of ongoing conversations on worktok, particularly the discourse around human resources. Classic workplace advice typically suggests that workers go to human resources if they’re facing a problem like harassment. However, a common counter-argument is that HR isn’t really there to look after workers—its true role is to protect the company.

If you follow the logic of this TikTok, HR is arguably the biggest undercover cop of all. And this attitude feels very specific to the millennial office experience. In recent years, there’s been a visible trend toward workplaces wanting to appear friendly and welcoming. In theory that’s a good thing, but if this casual attitude clashes with traditional workplace hierarchies, it tends to feel disingenuous—and workers definitely take notice.

The end result is an environment that stokes a mild sense of paranoia, where people are worried about their co-workers exhibiting undercover cop behavior beneath a friendly facade.

The Daily Dot has reached out to @nikolai_novikov via TikTok comment.