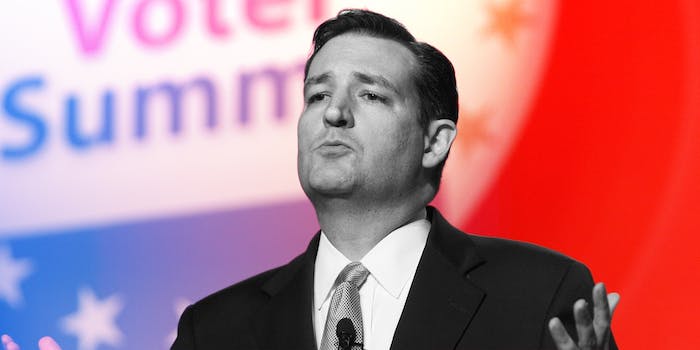 Until the debates are accessible to all Americans, no one is a winner.

Sens. Marco Rubio (R-Fla.) and Ted Cruz (R-Texas) were widely seen as the winners of last night’s Republican presidential debate—but you probably don’t know that. According to early numbers from Nielsen, viewership dropped a whopping 42 percent from the first Fox News-hosted GOP debate. On top of heavy competition from Game 2 of the World Series, there’s a reason for the low ratings: While CNN’s recent Democratic contest benefitted by being open to the public via livestreaming on the network’s website, you had to be a cable subscriber to access CNBC’s livestream.

Everyone else was forced to go to a friend’s house or—even more likely— follow along via the #GOPDebate hashtag on Twitter. The Fox News debate had the same issue, but at least that had the novelty of being first. That time around, I was one of 300 other Brooklyn residents struggling to hear the debate over the chatter of an incessantly noisy crowd at a local bar, but this time, I tried to make sense of the conversation over the limited quotes, sound bites, and Vines that Twitter offered. Sure, non-viewers can attempt to fill in the gaps with Slate recaps and Vox explainers, but instead of having the debate explained to us, wouldn’t be best to have the ability to watch it and make up our own minds?

The debates are a public good, and that good should be shared by all.

We shouldn’t have to pay to play when it comes to viewing the debates: While they’re often treated as a circus or a spectacle—akin to a particularly juicy Real Housewives episode—the debates aren’t just the biggest reality show on TV. They’re expressly important discussions that help decide the future of our country during a time of immense crisis. For less established candidates like Sen. Bernie Sanders (I-Vt.) and Sen. Rand Paul (R-Ky.), these debates help them reach a wider audience, and for the rest of us, each debate offers a chance to hold the men—and women—in power accountable to public interrogation. The debates are a public good, and that good should be shared by all.

CNBC isn’t the only network struggling with how to bring their content to a larger audience of Web viewers. Events like the Super Bowl and the Oscars have yet to solve the problem of cord-cutters, and attempts at livestreaming often offer spotty, inconsistent service. In a recent op-ed for the Daily Dot, my colleague, Chris Osterndorf, praised Yahoo’s recent streaming deal with the NFL, which brings online-only NFL games to football fans. But as Osterndorf pointed out, the “streaming quality was reportedly varied.”

Although many Internet companies are still in beta-testing mode when it comes to livestreaming, that shouldn’t stop them from investing in the technology. Amazon is reportedly investing in its own livestreaming service, which will offer a competitor to the Playstation Vue and the Sling TV, but Bloomberg reports it would still be a paid service. The best hope, in fact, for the future of livestreaming may be on the backs of individual networks like CNN, whose streaming service for the first Democratic debate was clear, reliable, and relatively glitch-free. Although the Internet opined CNN anchor Anderson Cooper’s firm moderation “won” that debate, the network itself was the real winner for leading the way in bringing together tech and TV.

Instead of having the debate explained to us, wouldn’t be best to have the ability to watch it and make up our own minds?

Doing so is incredibly important for the future of political engagement in America. In 2008, Barack Obama’s historic election to the presidency was buoyed by digital natives who were connecting with the campaign through social media, and Facebook itself has become a major force in elections—so much so that it co-hosted the first Republican debate with Fox News. Today, elections are won (and lost) over the Internet, the lens through which voters are increasingly engaging politics, whether that’s by reading Beltway blogs, watching YouTube videos, or reading up on a candidate’s platform via their website.

As the medium of our political discourse changes, our debates must follow. There’s an oft-told anecdote about the first televised debate between John F. Kennedy and Richard Nixon during the 1960 presidential race. When the pair of hopefuls squared off in Chicago, Nixon was just getting over the flu and had just survived a particularly draining bout of heavy campaigning. In contrast, the preternaturally tan Kennedy looked polished and refreshed, as if he’d just arrived at CBS Studios after a relaxing vacation. While those tuning in over the radio favored Nixon’s performance, Kennedy widely won over the viewing public.

Whereas 70 million Americans watched that debate through a televised public broadcast, CNBC’s audience of 14 million was just a fifth of that total, which was clear from the morning-after polls. As mentioned above, pundits credited Marco Rubio and Ted Cruz—across the board—with strong debate performances, while frontrunners Ben Carson and Donald Trump failed to make a mark. Stu Loeser, former NYC mayor Michael Bloomberg’s former spokesperson, quipped about Trump’s performance: “The only part of the debate when Trump did really well were the first five minutes.” Despite that, online polls indicated that he “won” the debate—simply because most of those voters likely didn’t watch.

In a recent piece on America’s voting crisis, the Daily Dot’s Ben Branstetter called out America’s culture of “low-information voting,” in which voters rely on base judgments, gut-check reactions, or preexisting prejudices rather than actual facts. However, the aforementioned polls indicate that what we’re really dealing with is “no-information voting,” and if we want to create a more educated, politically astute populace, we need to do so in the seemingly easiest way possible. It’s time to bring politics to all American televisions, computers, smartphones, Apple Watches, and any other way the public can stay connected.

Until the debates are free and available to everyone, no one is a winner.

Photo via Gage Skidmore/Flickr (CC BY 2.0)|Remix by Max Fleishman