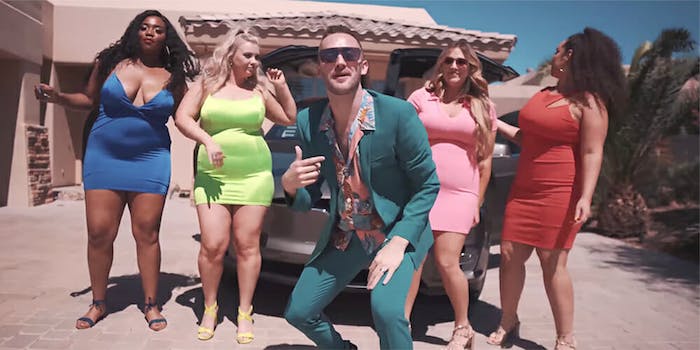 Curvy Wife Guy is back, this time with a music video for a song called “Chubby Sexy” that’s all about—you guessed it—the body of his wife, whose name is Sarah.

Robbie Tripp is the real name of the dude known as Curvy Wife Guy, whose 2017 Instagram post managed to both skyrocket the Tripps to viral fame and incite waves of criticism. Many thought the post, in which he insisted Sarah is “real” while listing her physical attributes, objectified women and used Sarah as a prop to praise himself as a good feminist.

The pushback on his messaging multiplied after the Tripps shared pregnancy announcements in April. Robbie Tripp’s post described Sarah as “a sacred vessel carrying my seed, the heir to the Tripp name, creating life in her beautiful, soft, increasingly round tummy.”

On Friday, Tripp dropped a music video that adds questionable lyrics to the growing list of ways he has described Sarah.

“My girl chubby sexy, call her bonita gordita,” Tripp rap-sings while wearing a fruit-laden shirt, accompanied by his wife and other women by a pool. “She rockin’ that peach emoji like hey, nice to meet ya / She got thick thighs, stretch marks, big booty / She lookin’ like a snack, I take her out to eat.”

In the song, Tripp also says to “forget the skinny type” and “forget that thin frame.” If his goal is to praise fat women, he once again does it at the expense of putting down other body types. And if his goal is to convince us he’s not using his wife’s body to build his own career and make a profit, well, he doesn’t do a great job of that, either.