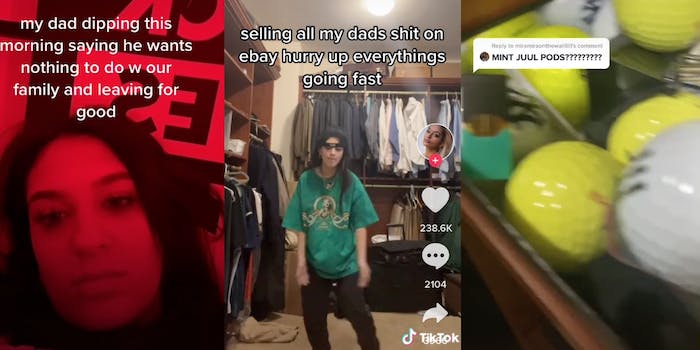 Claudia Conway, the daughter of former Trump adviser Kellyanne Conway and attorney George Conway, is claiming that her father has walked out on the family. Now, Claudia says she plans to sell her father’s possessions.

In a video on TikTok, the 16-year-old can be seen in her father’s walk-in closet while text on the screen states that she intends to auction off all her dad’s “shit on eBay.”

In response to one of her followers, Claudia shares another video detailing her father’s alleged collection of vaping cartridges.

“We got mint, menthol, and tobacco,” Claudia writes. “Take your pick.”

As noted by OK! Magazine, over the weekend Claudia asserted that her father was leaving due to drama at home.

“My dad dipping this morning,” Claudia wrote, adding that her father supposedly was supposedly “leaving for good.”

While it’s unclear what issues caused George to leave, the attorney has been a vocal opponent of President Donald Trump.

George, co-founder of the anti-Trump conservative organization “The Lincoln Project,” blasted the president on Twitter around the same time that he supposedly left home.

“If Congress can’t impeach a president for violating—indeed, inverting—the core duty set out in his oath of office—to preserve, protect and defend the Constitution of the United States—then what’s the point of impeachment?” George tweeted.

Claudia, who has made headlines repeatedly for exposing insight into her family life, has managed to rack up more than 1.5 million followers on the platform.