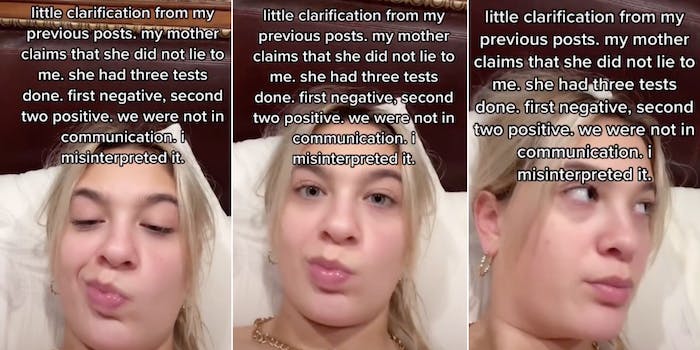 Claudia Conway, the greatest U.S. government whistleblower of this generation, issued a “clarification” on TikTok about the status of her mother’s COVID-19 diagnosis—at the behest of Kellyanne Conway, who dictated what her daughter should say.

“My mother claims that she did not lie to me,” the 15-year-old Conway wrote in her latest TikTok, uploaded late Monday night. “She had three tests done. First negative, second two positive. We were not in communication. I misinterpreted it.”

According to Business Insider, Claudia previously alleged that her mother lied to her about testing negative for coronavirus.

From offscreen, Kellyanne Conway can be heard telling her daughter how to phrase the message.

On Friday afternoon, hours after President Donald Trump tested positive for COVID-19, Claudia Conway said in a TikTok that it was “suspicious” that her mom was coughing. She confirmed that her mother tested positive for COVID-19 shortly thereafter. On Sunday, the younger Conway appeared to announce she had contracted COVID-19 as well, sharing a video of her in a bathtub with the caption “hey guys currently dying of covid!”

Conway’s TikToks evidently did not sit well with her family. In another one of the teenager’s since-deleted TikToks that was reposted on the r/PublicFreakout subreddit, Conway’s mother can be heard yelling and cursing at her from offscreen.

“You’ve caused so much disruption,” Kellyanne Conway tells her daughter in the deleted video. “You lied about your fucking mother about COVID. About COVID?”

“Mom, that’s how I interpreted it,” Claudia responds, shifting the camera toward her mom.

“You’re taping me again?” Kellyanne Conway says, lunging for her daughter’s phone before the video cuts.

Claudia Conway has since scrubbed her TikTok of nearly all her Trump- or Kellyanne-related COVID-19 videos. However, she also poked fun at Trump’s Monday announcement that he was leaving Walter Reed National Military Medical Center and “feeling really good.”

“Guys lmao he’s not doing ‘better,’” Conway wrote in the comments of a TikTok featuring a screenshot of Trump’s tweet. “He is so ridiculous. Apparently he is doing badly lol and they are doing what they can to stabilize him.”

The increased media coverage of Claudia Conway over the past several days has ignited a dialogue about the ethics of reporting so heavily on a teenager and drawn criticism from Kellyanne Conway herself. At the same time, several Twitter users have noted how problematic it is that Kellyanne—who served as Trump’s campaign manager and later counselor to the president until August 2020—was issuing updates about her health via her teenage daughter’s TikTok.

“Kellyanne Conway being MAD that her daughter ‘lied’ about COVID is the pinnacle of irony,” Twitter user @caasseydilla wrote. “The Trump administration has told blatant lies about covid and its dangers for 8 MONTHS. I trust Claudia Conway more than the White House.”

On Tuesday morning, Kellyanne Conway tweeted that she and Claudia were “faring well in quarantine. Everyone else is negative.” She also scolded the media in a follow-up tweet for their coverage of her daughter: “Like all of you, she speculates on social media. Yet she’s 15. You are adults. We have COVID, but it’s clear who’s really sick.”