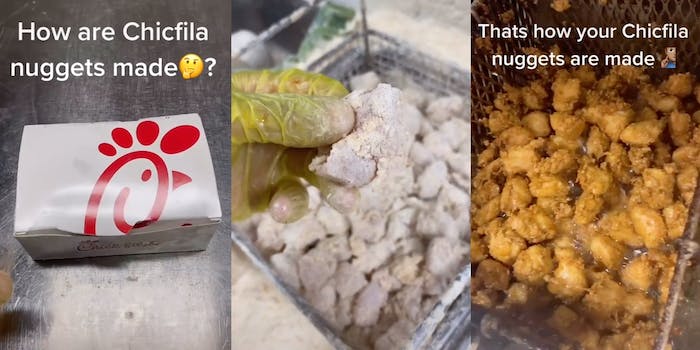 It's not what viewers were expecting.

A gutsy Chick-fil-A employee is showing the world how the fast-food chain goes about making its iconic chicken nuggets, and people are a little surprised.

TikTok user @dxxdxx7 posted a video earlier in the week revealing the process to the world. The post has racked up over 13 million views in such a short time, as people are apparently incredibly invested in how fast food comes to be.

The video starts off by displaying the “raw nuggets” from which Chick-fil-A’s nuggets originate, otherwise known as actual raw chicken. They get dumped in a basket of liquid @dxxdxx7 labels “milkwash,” rolled in some sort of seasoning undoubtedly kept secret by the chain, popped in a vat of oil, and fried for a pre-determined amount of time.

It’s a pretty straightforward cooking process, without any shocking or abhorrent twists and turns, and that actually may be why it’s gone viral.

People have become so conditioned to assume the worst from fast-food joints that to see Chick-fil-A actually cooking with real meat—and without doing anything that looks particularly disgusting—is being met with shock and delight in the video’s comments.

“Honestly I was scared to watch this because these nuggets are life!!” @eliidiaz94 admitted. “But I am so relieved they are actually made from scratch!”

And a number of users called for McDonald’s to share its process for nuggets, as it surely would have some serious differences from what this Chick-fil-A employee put on display.

There’s only one other video on @dxxdxx7’s TikTok page so far, and it reveals “how Chick-fil-A workers secretly make spicy nuggets!”

These sort of behind-the-scenes looks at how chain restaurants operate have become popular on TikTok, though some of them could easily make a person swear off fast food forever. As such, they aren’t always looked upon positively by management.

Even with Chick-fil-A, which doesn’t seem to have any life-changing secrets to hide about its food-making process, TikTok content can be taboo.

In August, an employee claimed she was fired from the popular chicken franchise after sharing menu hacks on TikTok to help people spend less and get seasonal offerings any time of the year.