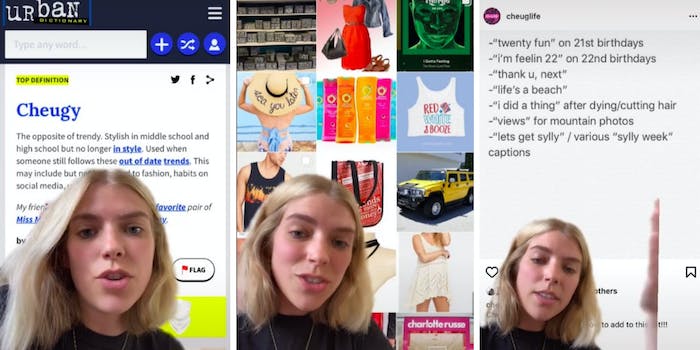 'Anything Rae Dunn is an absolute crime.'

There’s a new word making its way around online to describe aggressively basic Millennial girlboss culture. And thanks to TikTok, “cheugy” (pronounced “chew-gee” or “choog-ee”) is already spreading like wildfire.

What does cheugy mean?

In a nutshell, “cheugy” refers to a certain type of young woman who draws inspo from Pinterest; loves pumpkin spice or autumn anything; identifies with wine (particularly rosé) as a personality trait; seeks out clothing and home goods featuring inspirational “live, laugh love” type of quotes; and who lives and breathes the lyrics of music by Ariana Grande and Taylor Swift.

Though many might be quick to label these traits as “basic,” cheugy culture is almost as if basic leveled up. While basic characterizes “someone or something as unoriginal, unexceptional, and mainstream,” cheugy takes it a step further.

According to the top Urban Dictionary entry, cheugy refers to the “opposite of trendy,” and “when someone still follows these out-of-date trends.” These trends “may include but [are not] limited to fashion, habits on social media, usage of slang,” and so on. Women who are characterized as cheugy are also often proudly cognizant of their life choices—such as millennials who adamantly defend side parts and skinny jeans despite overwhelming Gen-Z ridicule.

Though the entry was dated Nov. 08, 2018, “cheugy” didn’t begin to enter our widespread lexicon until TikTok user Hallie Cain posted a video on March 30th, 2021, summarizing the term for widespread use.

“OK TikTok, I have a new word for you that my friends and I use that you clearly are all in need of,” said 24-year-old Cain, a Los Angeles-based copywriter. “So I keep seeing videos like this on my ‘For You’ page,” Cain explained, directing viewers to another TikTok video captioned, “Things that give off ‘I got married at 20’ vibes.”

“People will say things such as ‘this is millennial,’ or ‘girlboss energy.’ All of these terms are pointing to the same thing,” Cain continued. “The word, my friends, is ‘cheugy.'”

Some examples Cain pointed to were graphic tees and hats, phrases on clothing, Herbal Essences shampoo, and Instagram captions such as the following, outlined by the cheuglife Instagram account.

Other cheugy-like qualities evidently include a die-hard love for the NBC sitcom The Office, posting Minion memes on Facebook, and even a fondness for lasagna.

Gaby Rasson, a 23-year-old software developer in Los Angeles who is credited with coining the term, recently told the New York Times that she started using the word back in 2013 while attending Beverly Hills High School as “a way to describe people who were slightly off-trend.”

“It was a category that didn’t exist,” Rasson said in the interview. “There was a missing word that was on the edge of my tongue and nothing to describe it and ‘cheugy’ came to me. How it sounded fit the meaning.”

Kelsey Weekman, who was the first to write about the trend for In The Know, cites examples of cheugy culture as “T-shirts with phrases such as ‘yes way rosé’ on them” and “wooden signs you might find at Hobby Lobby.”

Though, while some may point to cheugy as yet another way to bully or demean women, in a piece for Rolling Stone, columnist Ej Dickson provides another take.

“This is misguided,” writes Dickson. “Bullying is what happens when you weaponize markers of someone’s identity against them, and if you consider wearing Tory Burch sandals an integral aspect of your identity, then you probably need to take a long hard look at your own privilege.”

“Misogyny is insidious and takes many forms in our culture, but making fun of someone for posting Minion memes is not one of them,” Dickson surmises.

The quality is also open to interpretation, and ever-evolving. Cain likewise assured any millennials not to worry about being behind on trends.

That said, next time you pose with a Rae Dunn mug on Instagram, know that you’re taking your reputation into your own hands.

‘Heyo, the person who sent you this wants you to know’ about this TikTok meme