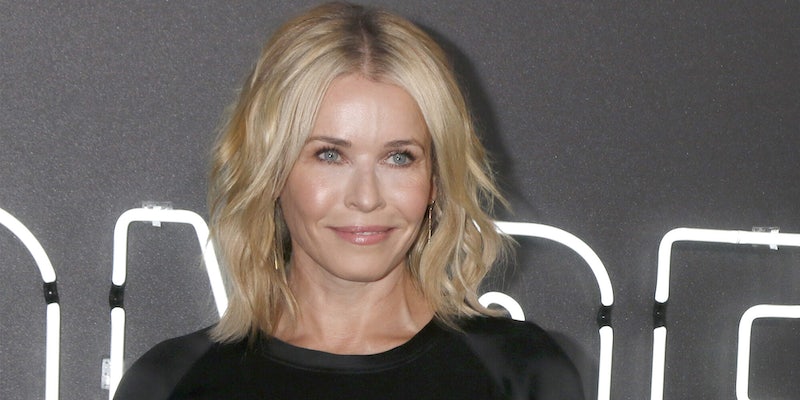 Handler shared a video of Louis Farrakhan, who has a history of espousing anti-Semitic views.

Chelsea Handler befuddled her followers on Monday when she shared a video of Louis Farrakhan on Instagram that some interpreted to be a tacit endorsement of anti-Semitism.

The nearly 10-minute video clip shows Farrakhan speaking before a live studio audience during an unspecified year on The Phil Donahue Show. The Nation of Islam leader discusses racism in America and the whitewashing of U.S. history.

“I learned a lot from watching this powerful video,” Handler captioned her post.

Farrakhan has a long history of espousing anti-Semitic views, and Facebook banned him from the platform last year. The Southern Poverty Law Center also deems the Nation of Islam a hate group. Some of Handler’s followers accused her of promoting anti-Semitism by sharing a clip of Farrakhan.

“So, based on this logic, if you find a video of Hitler saying something positive and powerful, will you feel equally compelled to share it?” Instagram user @cindyjh5 asked. “You gave hate credibility and a large platform today.”

Handler responded, “No, because Hitler was responsible for killing millions of lives. Farrakhan is just responsible for his own promotion of anti Semitic beliefs. They are very different.”

Elsewhere on her post, Handler commented, “Another thing: perhaps Farrakhan’s anti-Semitic views took form during his own oppression. We know now that oppression of one race leads to an oppression of all races.”

Some users read Handler’s response as a clear excusal of anti-Semitism as long as the anti-Semite in question makes some good points.

“In 2020 you can get canceled for sharing the wrong peer reviewed study, but not for sharing Farrakahn [sic] videos and blaming Jews for antisemitism,” @CursedMerc tweeted.

Twitter user @CashSoni added, “I can’t believe she doesn’t realize that Hitler wasn’t the one pulling the trigger, he was just planting the idea like Chelsea handler is doing.”