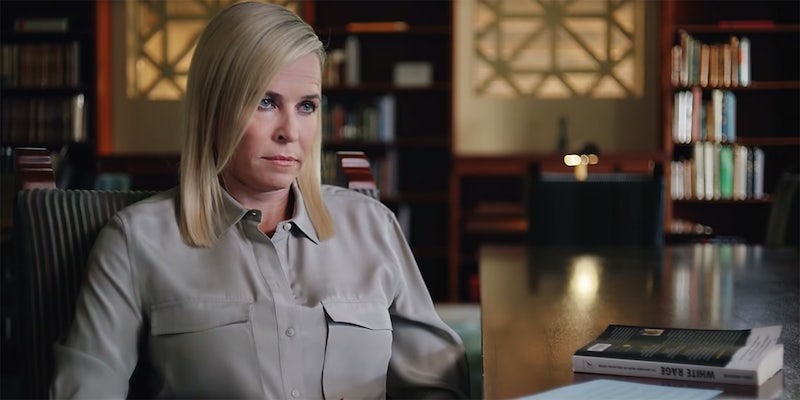 The comedian reckons with her own white privilege.

In her latest Netflix film, comedian Chelsea Handler gets serious about her white privilege.

Hello, Privilege. It’s Me, Chelsea is a documentary about Handler facing off with her white privilege and how systemic racism continues to permeate American culture today. In the documentary, Handler talks with Black comedians, activists, and students, as well as white folks who hold a variety of perspectives about racism. Most importantly, Handler learns a lesson about when it’s essential to use her voice for advocacy—and when it’s time to stop and listen. While the documentary feels heavy-handed and exploitative at times, it starts a meaningful conversation about how white people can reckon with their privilege.

Handler is both the most surprising and perfect person to explore their privilege publically. As the author of the cringy Uganda Be Kidding Me book and who just recently had to attend sexual harassment training after slapping the behind of a Black woman while filming this documentary, Handler has a checkered history when it comes to sensitivity. Therefore, it’s fascinating to watch her learn about systemic racism and take responsibility for her complacency.

Handler packs in hundreds of years of history about the harrowing relationship between white and Black people into just one hour. She then uses that context to unpack oppression that people of color still combat, such as alarming rates of Black youth incarceration and voter suppression.

Unfortunately for Handler, she’s at times the worst part about the film. Most of her commentary or jokes during interviews came off either jarring or cringy. (For example, she makes a joke about Tiffany Haddish having an old Jewish man die “inside her” after Haddish shares that she had to perform at over 500 bar mitzvahs early in her career.) Instead, the documentary thrives when Handler uses her platform to allow disenfranchised people to speak. Handler speaks with several Black activists who work to increase voter turnout and improve the lives of youth. At a barbecue in Antioch, Tennessee, she talks with folks who might have traditionally been viewed as “white trash” and “uneducated.” They share some of the smartest perspectives of the documentary about the prevalence of racism in a broken justice system.

The highlight of the film occurs when Handler reunites with her high school boyfriend, Tyshawn. As a Black boy growing up with a drug-using mom, Tyshawn got caught up in a cycle of poverty that ended with him in jail for 14 years. Handler reflects with him about how despite the number of times she encountered police while breaking the law, her life went down a very different path than his. It’s a critical, real example of how privilege allows white people to be held at a different standard.

It’s hard to watch Hello, Privilege. It’s Me, Chelsea without feeling like Handler is exploiting her “wokeness” at least a little bit. She says at the beginning of the film that she “wants to be a better white person to people of color without making it a thing”—but then makes it a “thing” by airing a documentary on a major streaming service. She’s also presumably profiting off a film about her white privilege. There’s at least the assurance that Alex Stapleton, a Black woman, directed the film. But it also feels like a lose-lose situation for Handler. On the one hand, people are bound to criticize her for virtue-signaling by making this film. On the other hand, if she weren’t vocal about the journey she’s been on, she’d be accused of not using her voice to create change.

Whether or not Hello, Privilege. It’s Me, Chelsea accomplishes what it set out to do depends on what Handler decides to do next. If she chooses to profit off her wokeness and move on to her next standup tour, it will lose its power. But if Handler decides to put her money where her mouth is then it can be considered a critical move forward in Handler’s activism.