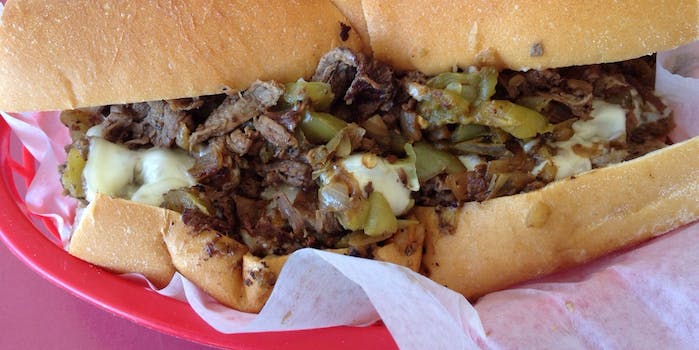 Cheesesteaks are going to tear the DNC apart

What? No, not because of the Wikileaks dump of DNC emails—or the fact that it caused DNC chair Debbie Wasserman Schultz to resign her position. I’m talking, of course, about the mid-Atlantic’s most controversial food:

You see, it’s simply not possible for any politician—let alone a Democrat!—to eat a Philly cheesesteak without being roasted for their choice of toppings, method of consumption, or ignorance of better cheesesteaks.

Philadelphians should refrain from making suggestions on each and every cheesesteak tweet this week. My column: pic.twitter.com/cCvxDG8cdN

In fact, 2004’s Democratic nominee for president, John Kerry—apart from getting reamed for windsurfing and serving in the Vietnam War—was lambasted for ordering a steak with Swiss cheese and “delicately nibbling at it as if it were tea toast.” The pressure to do the cheesesteak stop correctly is so ridiculous that many candidates are now avoiding the sandwich altogether.

Thank you Snapchat for putting a "cheesesteak" option on the "I'm Voting For:" filter. Finally someone who gets it.

Note to out-of-town #DNC delegates: if you do not have a serious cheesesteak in Philly. Leave immediately.

My hot take: the cheesesteak is the most overrated of all foods COME AT ME TWITTER YOUR FAKE MEAT AND CHEESE SUCKS https://t.co/GacZyvJx20

Wiz wit is the worst cheese to put on a cheesesteak. https://t.co/fVA3Iwvemb

even if you go to Pat's or Geno's, it's okay, even if they are two of the worst places in Philly to get a cheesesteak

Also, Dalessandro's has the best cheesesteak.

This isn’t something as simple as New York pizza, where the rules are basically just: “Don’t go to a chain, and don’t use a fork and knife.” (But seriously, Trump, get your shit together.) There is basically no end to the faux pas one can commit in trying to have a cheesesteak for lunch.

Clinton and Sanders will eat a cheesesteak "Lady and the Tramp"-style at DNC as symbol of party unity. #DemsInPhilly #DNCleak

So no, I don’t expect the Democratic party to crumble in the face of dissent from angry Bernie Sanders supporters. I don’t expect Schultz’s disgrace to have any lasting impact, nor do I imagine Hillary Clinton making a misstep—unless, of course, she fucks up when it’s time to eat a cheesesteak.

And if she does… god help us all.