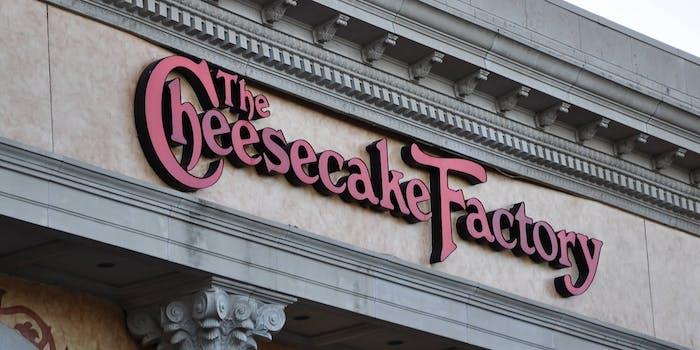 'The Cheesecake Factory said if I burn you burn.'

When the first of the month comes, the Cheesecake Factory will not be mailing any rent checks.

The company informed its landlords that none of its 294 locations will be making their April rent payments. CEO David Overton wrote a letter to the company’s many landlords, explaining the situation and apologizing for any inconvenience.

The Cheesecake Factory is far from the only tenant that will struggle to make April rent. But its outright refusal to pay rent fired up people online, many of whom are standing behind the company. “In solidarity with the Cheesecake Factory I will not be paying rent either,” user JP Brammer wrote on Twitter.

Jokes and memes about communism soon followed. The chain of restaurants has officially been dubbed “comrade Cheesecake Factory.”

More than anything, the trending news made everyone really, really want some cheesecake. “First Waffle House was trending and now the Cheesecake Factory,” one person wrote. “Now I seriously want these carbohydrates!”

While most everyone was standing in solidarity with the chain of restaurants, a few people pointed out that not all companies have the ability to outright refuse to pay rent. The Cheesecake Factory is big enough that most of its locations will likely remain, but smaller businesses don’t have the same pull. “All kidding aside…large chains can get away with this for a while,” one commenter wrote. “Smaller ones or Mom and Pops cannot.”

Some were convinced that the whole thing is a joke. After all, rent will come due on April 1. “Cheesecake Factory really upping the April Fools game,” one person wrote.

Yet the restaurant’s announcement appears to be true.

The Cheesecake Factory has been hit hard by the social distancing necessitated amid the coronavirus pandemic. Multiple locations have been forced to shut down, and the company’s stock has plummeted over the last several weeks.