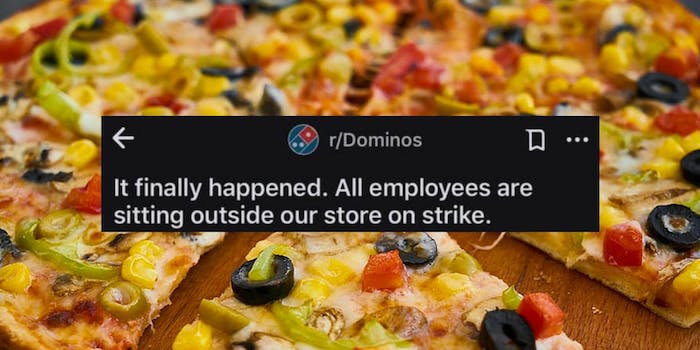 Did a Domino’s in California go on strike over the coronavirus?

A viral Reddit post claims a strike took place after the location was exposed to the virus.

A Reddit post has gone viral for detailing an alleged strike at a Domino’s Pizza location in California.

The user behind the claim, u/javaisjustcoffee, stated that their general manager (GM) walked out on Tuesday morning and was demanding both paid sick leave and two weeks off after the location was exposed to the coronavirus.

“Every single driver on shift right now followed him outside,” the post said. “The other two insiders did as well. The store is fucking empty.”

The poster went on to express hope that local media outlets would soon arrive to cover the strike as the store’s employees sat outside turning away customers.

The post ended with a call to action: “I urge you guys to do the same.”

Comments began pouring in from across social media from those offering solidarity.

Other alleged Domino’s employees likewise praised the store’s actions amid the escalating pandemic.

“I love my GM and if he did this I’d follow him too,” user ErwinAckerman added. “He is a great boss and leader. Luckily I’m on a leave of absence right now but if things get worse I hope our crew would do the same.”

The following day, however, when users returned to the thread to learn of any new updates, the post was gone.

“Sorry, this post was deleted by the person who originally posted it,” a notice now says.

Not only that, but the account for the original poster, u/javaisjustcoffee, had also disappeared.

Users began questioning whether the moderators had somehow been involved. But one of the subreddit’s moderators, who asked to remain anonymous, denied such action to the Daily Dot.

When attempting to visit the account, a message simply states that the “user” made the decision to delete it.

Some began questioning whether the incident ever happened and suggested the user could have merely been attempting to stir other franchise locations to action.

The Daily Dot reached out to the Domino’s public relations office to see whether the company was aware of the alleged incident.

A spokesperson stated that Domino’s became aware of the post on Tuesday and began investigating.

“All of our stores in California are owned by independent franchisees, who we reached out to,” the spokesperson added.

In the end, Domino’s says it was “unable to find any evidence that this actually happened.”

Unless evidence to the contrary appears, it seems likely that the viral Domino’s coronavirus strike of 2020 did not take place. At least not yet, anyway.