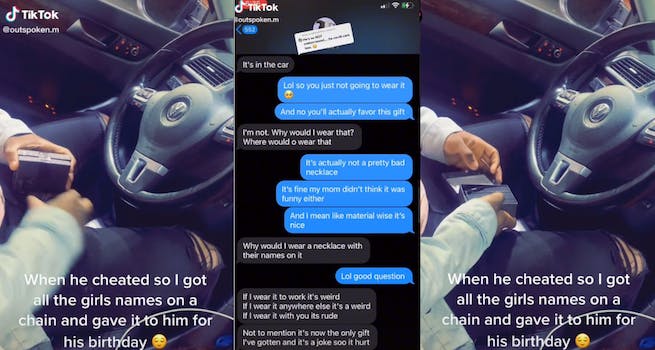 ‘Money is temporary but embarrassing him is forever’: TikToker gets boyfriend a B-day chain with names of all the girls he cheated with

'He closed that thing like it was Pandora's box.'

A TikToker got her boyfriend a birthday chain with, allegedly, the names of all the girls he cheated with in a viral video.

@outspoken.m filmed her boyfriend opening the birthday present she got him, which is said to be a chain engraved with the names of all the girls he cheated on her with.

A text layover narrates, “When he cheated so I got all the girls names on a chain and gave it to him for his birthday.” The 16-second video got over 12.5 million views and 2.1 million likes since posting four days ago.

Unfortunately, viewers were unable to discern exactly what is on the chain. The video cuts off right after he opens the box.

Many of the 13,088 comments were split on the success of her revenge. Some applauded the pettiness of the act and mocked the boyfriend.

“He closed that thing like it was pandora’s box,” said @maiyurrr.

Others questioned the rationale behind the money and effort of making a custom chain for a cheater.

“Wasted money for giggles. He got the last laugh bestie,” said @presofthebaddies.

“I wouldn’t even waste my money on that. Write their names with a key on his car,” said @amissionarydess.

In a follow-up video, @outspoken.m shows a text conversation between herself and her boyfriend addressing the chain.

Their conversation apparently confirms that the chain did have names of girls he’s cheated on her with, and that they are still together.

The Daily Dot has reached out to @outspoken.m for comment.