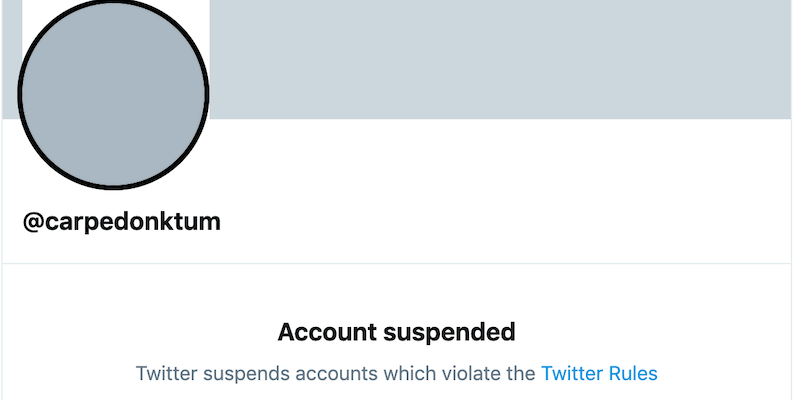 The suspension follows his controversial remarks.

Update Oct. 14, 3:30pm CT: Carpe Dunktum is back on Twitter. Twitter told the Daily Dot the suspension was regarding “valid copyright complaints sent to us by a copyright owner.”

Today, Twitter suspended the account of @CarpeDonktum, a popular pro-Trump mememaker who was defending the church shooting spoof of President Donald Trump that sparked outrage.

The video aired at a room during a conservative news conference and was first reported on by the New York Times. The video was a spoof of a shooting spree in a church from the movie Kingsman: Secret Service. In it, Trump’s face is splayed over the protagonist of the scene, and he is seeing shooting and stabbing people and media organizations whose faces have been superimposed over victims.

The video, which was first made last summer and has been online since then, aired at the American Priority Conference, a conservative gathering where Donald Trump Jr. was slated to speak.

In the wake of the Times report, numerous people decried the memetic video for glorifying violence against politicians and the media.

The meme was created by the Geekz Team, a  YouTube channel that contributes to Carpe Donktum’s Meme World, according to the Washington Post. It is not clear if Donktum was involved in the video, or shared it at all.

While Donktum has not been linked to the Trump video, he was defending the video online on Monday and joked that some of his posts would be interpreted as incitements to violence.

In the past, Donktum has written about the mainstream media’s overreaction to memes and symbols used by far-right groups.

This summer, Donktum was the subject of several articles that planned to reveal his identity after he received a private audience with President Donald Trump. Donktum argued that the media revealing his name could inspire violence against his family. Eventually, Donktum chose to reveal his name, Logan Cook, before stories ran.