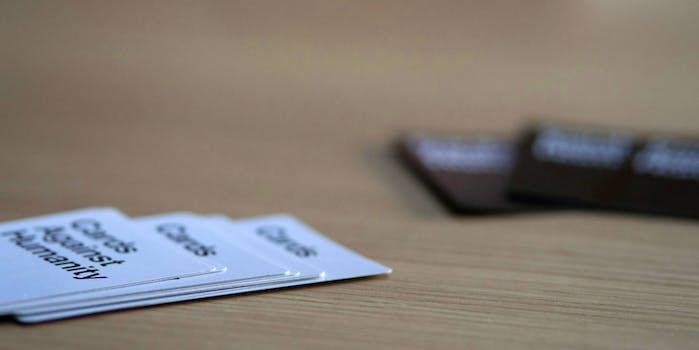 Is this all one big goof?

In this new era of fake news and alternative facts, people have to constantly question what is true and real. If it seems like the whole world is trying to fool you, you’re probably right, because billions of ads are trying to deceive you.

It also turns out that you can’t even trust Super Bowl ads, particularly if they come from Cards Against Humanity.

On Sunday, the game company that calls itself “a party game for horrible people” wrote a blog post for Medium in which it explained how it had botched its Super Bowl commercial and how “the advertisement showed a disappointing return on investment ($0), and we are now going out of business.”

The advertisement in question was… well… just a delicious-looking potato with the word “advertisement” scrawled on it in black marker.

According to Cards Against Humanity, that was not the right call. And there were plenty of reasons why, including firing its ad company 48 hours before the big game, bad research that suggested Americans absolutely adore potatoes, selecting the wrong spud for the spot, not connecting with the kids, and because “we forgot to mention our product.”

Funny right? But, as the Next Web notes, it all seems to be a goof. Cards Against Humanity apparently didn’t air an ad during the game, and it’s reportedly still in business (the company didn’t immediately respond to a Daily Dot request for comment).

Which makes this whole potato ad and accompanying blog post kind of brilliant.

Super Bowl ads this year cost $5 million, and there are so many of them, one must be utterly outstanding to stand out from the pack. But Cards Against Humanity received plenty of free publicity, because it’s made a fake bad ad with an excellent analysis of why it failed. And now we’re writing about the gag (and the company itself).

Aside from being a beacon for game-night hosts around the world, Cards Against Humanity also recently has tried to recruit Barack Obama to be its CEO, raised $30,000 to dig a giant hole, and badly trolled Trump with billboards in Michigan. So, an unorthodox strategy to getting people to talk about the company is one constant.

Now, the company has taken its trolling—its trolling of us, anyway—to a new level. As Cards Against Humanity wrote in the blog post:

“Most startups fail for one of two reasons: they run out of money, or they fail to reach an audience. We spent all of our money while simultaneously failing to reach an audience. This is a classic blunder. At Cards Against Humanity, we believe that you can only become a master by trying and failing. In this way, failure is life’s greatest teacher; failure is actually success. At Cards Against Humanity, we fail all the time. We are veterans of failure. And constant failure, plus unlimited capital, is what led us to greatness.”