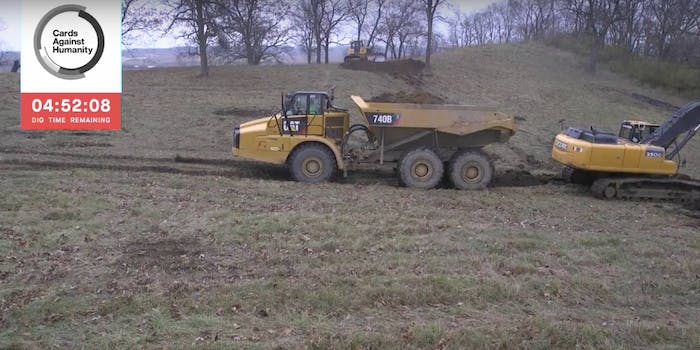 Screengrab via Cards Against Humanity/YouTube

Cards Against Humanity has raised $30,000 to dig a giant hole—and no one knows why

More than 4,000 people are watching this hole get bigger.

The shopping extravaganza known as Black Friday has produced some seriously incredible things over the years. Holding it down on its own cozy corner of the web is Cards Against Humanity (CAH).

Last year, the card game company made over $71,000 by offering literally nothing for $5. The funds went to a mixture of charities, necessities, and splurges for employees.

In 2014, CAH sold literal bullshit, netting it $6,000 which was then donated to charity. So, what’s the grand, bizarro scheme this go round?

A literal hole in the ground, dubbed the “Holiday Hole.”

Somewhere in America, the CAH crew is excavating. For every $22 donated, just over a minute is added to dig time. As of this writing, over $230,000 has been raised, which means crews have well over 28 hours to create the biggest hole you’ve ever seen.

And what happens if crews make it far enough to hit magma but not melt equipment. As CAH’s brief FAQ clarifies, “At least then we’d feel something.”