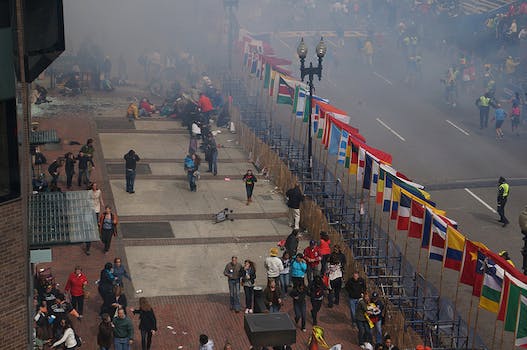 A trash can explodes, and the Internet races to help (and harm)

The Internet raced to respond to the tragedy of the Boston Marathon explosion, it all its light and dark colors.

The moment a trash can exploded near the finish line of the Boston Marathon, that tragic event and its aftermath became all the Internet could talk about.

And the Internet’s reaction, perhaps predictably, would both confirm and deeply undermine our faith in humanity.

Many, of course, sought to take advantage of the attention.

Within hours of the explosions, people had already started sham charity accounts. One, now banned, claimed to be an official Boston Marathon account and promised to make a $1 donation for every retweet. Presumably, the account’s owner hoped he or she could amass a huge number of followers and then change the name of the account. In a few days, you’d be following @special_offers and have no idea why.

Even worse, malware distributors saw not tragedy but opportunity. Immediately after the bombings, emails quickly began circulating with subject lines such as “Boston Explosion Caught on Video.” Click the file and you won’t be watching history unfold; you’ll be installing a virus or Trojan horse.

Still others hoped to take advantage of the events in a much more personal way: Craigslist quickly filled up with personals using the bombing as a hook for sex. Users hoping that “they find the persons who did this” apparently also hoped that someone else would want shake of the sadness by celebrating life… with them… in my place or yours?

On the other hand there were the self-appointed crusaders of justice. Because what would the Internet be without a little vigilantism?

Immediately after the bombings, Reddit and 4Chan sprang into action, scouring news footage to see if they could identify the person planting the bombs. Quite a few suspects were identified, some obviously wrongly, some perhaps less so. While official investigators have announced that they have a suspect (and CNN has both reported and then unreported an arrest), it remains unclear what role, if any, the online amateur sleuths have had.

The Internet’s sense of irony being what it is, the deep photo analysis naturally drew as much comedic as serious attention, with many “Where’s Waldo” parodies sitting side-by-side with urgent analysis.

And then there were just as many comments admonishing users to leave it to the authorities. My favorites are the ones that go something like this: “Guys, seriously, you can’t possibly figure this out based on news footage and you’ll do more damage by accusing the wrong people than you can ever help… But, by the way, it’s clearly NOT the guy in the white hat—his backpack doesn’t have silver stripes.”

In one way or another, however, the Internet did one thing above all else: It rushed to help. Google immediately launched its person finder, helping people locate their loved ones amid the chaos and overwhelmed wireless network. Boston residents began listing their couches and spare bedrooms in a Google Doc so that people stranded in Boston could find a place to stay. Local restaurants and coffeeshops took to Twitter and Facebook offering shelter, free food, and wi-fi.

There was even a groundswell of support for the runners who hadn’t been able to finish the marathon: 16,000 undeterred runners and supporters gathered online to organize a “last 5” run to finish and reclaim the race.

Beyond Boston, people all over the Internet wanted to do something. The Boston Marathon Facebook page filled with condolences. The city was overwhelmed with gifts of free pizza, frequent flier miles, and car rides from Reddit. Families with injuries quickly raised hundreds of thousands of dollars from all over the Internet.

People even took to Whitehouse.gov to start a petition for a national holiday celebrating first responders.

One of the most remarkable things about the Internet is its ability to bring a surprising voice to the fore when that voice is saying just the right thing at just the right time. In this case, that voice belonged to Patton Oswalt.

On the afternoon of the 15th, Oswalt wrote this on his Facebook page:

“I don’t know what’s going to be revealed to be behind all of this mayhem. One human insect or a poisonous mass of broken sociopaths. But here’s what I DO know. If it’s one person or a HUNDRED people, that number is not even a fraction of a fraction of a fraction of a percent of the population on this planet. You watch the videos of the carnage and there are people running TOWARDS the destruction to help out.”

He goes on—and I encourage you, if you have not already, to read the whole post. It got 30,000 likes within its first hour.

Oswalt is right, this crime was perpetrated by a few twisted souls. But those few points of darkness are quickly overwhelmed, if you just look, by the thousands who rush into the carnage with nothing but the purest of intentions in their hearts.

Nowhere was that more true than on the Internet. Perhaps one of the greatest and most amazing contributions of the Internet to our lives is the fact that it gives us all a new dimension to help in such times of need. We may be a thousand miles away, but it is no longer our only option to just sit on our couches and watch as the story unfolds on cable TV. Now, we can do something. We can get on our computers, our tablets, or smartphones and help. We can find our loved ones or pay stranger’s a hospital bill.

We can send a pizza.