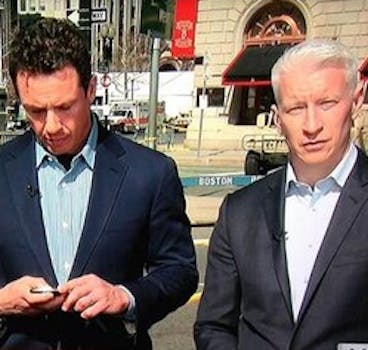 CNN has done it again.

Shortly after reporting a suspect was arrested in the Boston Marathon bombing case, CNN followed other networks in confirming its source was incorrect and that no arrest had been made.

This video compiled by Talking Points Memo shows the dramatic retraction as it happened on air:

It’s another flub for CNN after the network wrongly reported last June that the Supreme Court had struck down President Barack Obama’s healthcare law.

As is often the case when a corporate entity screws up in a very visible fashion, Twitter’s comedians slapped down CNN with caustic wit. And they’re back at it after today’s retracted report about the Boston investigation.

After yet another embarrassing incident, one has to wonder if Anderson Cooper will be on the phone to his agent tonight, demanding to get the Today hosting gig and move far away from CNN’s clutches.