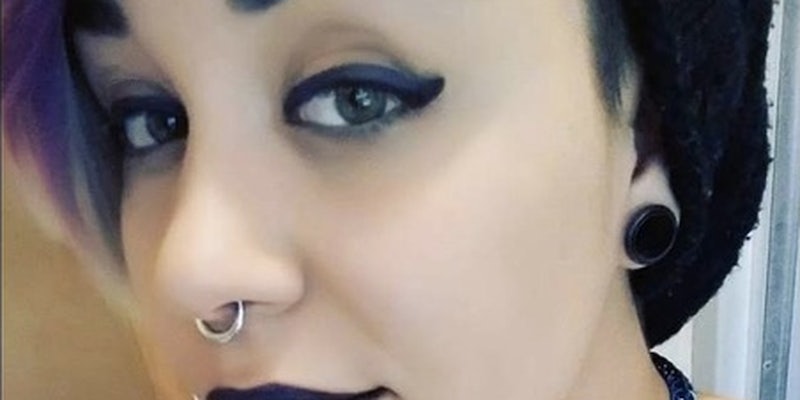 The witch hunt known as 'Boneghazi' came to a thrilling conclusion in January.

A Louisiana witch became notorious on Tumblr months ago for collecting human bones from a graveyard, but memes disappear as quickly as they arrive, and the controversy seemed to have passed. But some memes, like some bones, just refuse to stay buried.

In late 2015, the Tumblr community went on a literal witch hunt, raising the alarm about “littlefuckinmonster,” who had purportedly stolen human bones from a New Orleans graveyard for purposes of magic spells. Littlefuckinmonster was soon revealed as a witch named Ender Darling, and a criminal investigation ensued. That was the end of “Boneghazi” until this week, when the New Orleans Advocate spoke to Darling and Darling’s former roommates about the bones and the fallout.

“Boneghazi” began when people on Tumblr discovered a Facebook post where Darling had offered to ship the bones they didn’t need for their “curse work” to other witches. The post spread far and wide, and the Louisiana Attorney General’s Office launched an investigation into whether Darling was trafficking in human remains. 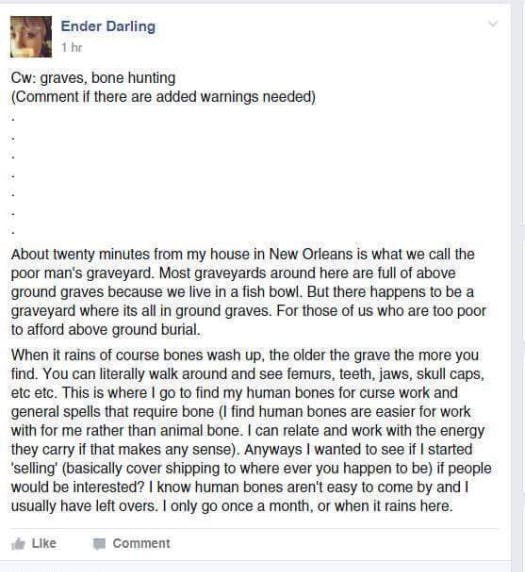 According to court documents obtained by the Advocate, police searched Darling’s Mid-City home and found “11 bones and four teeth.” Darling handed them over in a fishbowl, telling agents “there’s probably human bones in there, but I know better than to give you that answer.”

“They were coming in seriously expecting to find bodies and human organs and have me and my roommates arrested for black-marketing human remains,” the witch told the Advocate’s Jim Mustian.

Darling claimed they picked up the bones from an above-ground “poor man’s graveyard,” a potter’s field, when they washed up after heavy rain. To the many people who have accused them of vandalism or disrespecting the dead, Darling responds that the burial sites were in woeful condition to begin with.

“I’m sorry I care more than you care about your dead,” Darling told the Advocate.

There’s also the matter of shipping the bones to other witches. Darling hasn’t been charged with a crime yet, but if the AG does opt to prosecute, it will likely be for trafficking in human remains.

Darling admits to mailing some bones but argues it was OK because they weren’t for sale. All the Facebook post asked was reimbursement for the shipping costs.

Weirdly enough, that might turn out to be a salient legal point. It’s illegal in Louisiana to sell bones that have been removed from a burial site without permission, but Darling wasn’t technically selling them. The state could still argue, under the same statute, that the remains were removed with “malice or wantonness.”

Is picking up bones for magic rituals in accordance with one’s beliefs wanton or malicious? We could find out in an actual witch trial.

Meanwhile, Darling has relocated to Florida to escape the harassment and threats they’ve faced since being accused of being a grave robber. Darling told the Advocate they feared for their physical safety.

And on Tumblr, the update on Darling—particularly the version reported by New York Magazine’s Following blog—has restarted the “bone discourse,” the ongoing argument over whether the bone collection should’ve been handled differently due to issues of race and traditional religions, or whether it was just a dumb crime.