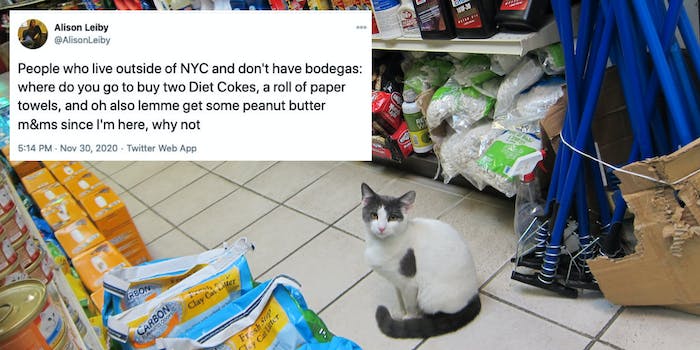 This viral tweet has people debating the merits of bodegas

Depending on where you live in the country, you probably have a small store where you can acquire basic goods, produce, and packaged or prepared food items. In the suburbs, these are typically called convenience stores. In cities, however, they go by a variety of names such as corner stores, minimarts, and delis—or delicatessens, if you’re feeling fancy. But in New York City, they are unquestionably referred to as “bodegas,” as a few people may have recently learned from a viral tweet.

For the uninitiated, “bodega” is Spanish for “warehouse.” According to a 2014 Gothamist article, the word was brought to New York when Spanish-speaking immigrants began migrating to the city in the first half of the 20th Century. Now, bodegas are simply a way of life for New Yorkers, as writer and comedian Alison Leiby pointed out in the jokey, yet somewhat tone-deaf tweet.

“People who live outside of NYC and don’t have bodegas: where do you go to buy two Diet Cokes, a roll of paper towels, and oh also lemme get some Peanut Butter M&Ms since I’m here, why not,” Leiby wrote. “This is also about how candy is kept behind glass and is only accessed by the owner or, when he is not there, his 8-year-old son,” she added in parentheses.

Unfortunately, while a lot of New Yorkers were there for the bodega love, the tweet also became quite ratioed as those outside New York City mocked the insular attitude. “Sounds exotic,” quipped Twitter personality Jordan Uhl. “Convenience stores. Corner stores. Supermarkets. This is a ridiculous question,” added noted Philadelphian Brian P. Hickey.

Others piled on to #WellActually Leiby’s tweet or roast it with jokes and memes.

Others, however, including Padma Lakshmi and comedian Kath Barbadoro, jumped in to tell everyone to chill out already—because Leiby was clearly making a joke.

Thankfully, Leiby was undeterred by the bodega tweet hate. “If they don’t talk about all this on NY1 tomorrow then it was all for nothing,” she tweeted late Monday night. And, sure enough…

See? We’re all just having fun, here. Wherever you happen to purchase your two Diet Cokes, a roll of paper towels, and some Peanut Butter M&Ms, since you’re there, we see you!

Read more on the Daily Dot