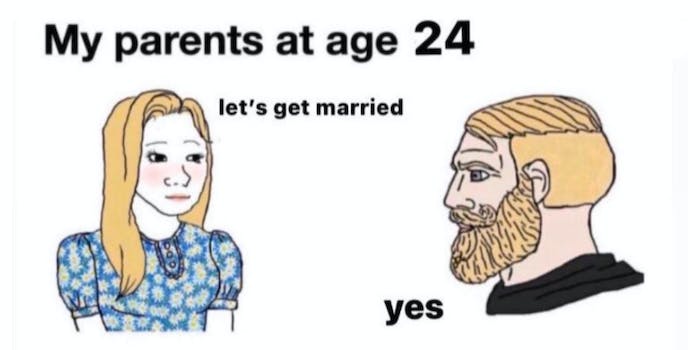 Our parents had it so much easier...

For those of us in our 20s, 30s, and heck, even some of us in our early 40s, life is markedly different than it was for our parents. Between crushing student debt and skyrocketing real estate prices, it’s becoming harder and harder for young people to acquire wealth and settle down after graduating high school or college. The ensuing apathy has fostered an entire generation of adults with arrested development syndrome, which can be accurately summed up in these new “my parents at age” memes.

The specific age varies depending on the author of the meme, but they tend to be most popular with Millennials and Gen Zers, similar to “OK Boomer” memes. The basic setup, however, is a cartoon featuring the female Wojak and Yes Chad memes with the first panel reading “my parents at age [blank]” with some variation of “let’s have a baby,” “let’s get married,” or “let’s buy a house.” The second panel then depicts what life is like from the meme creator’s point of view—typically with some acerbic response.

Over the past few weeks, “my parents at age” memes began circulating on Instagram, Twitter, and Reddit. As you can see from the examples below, these can reference anything from settling for plants to full-on existential crisies.

One user even got meta with it:

Though, you don’t necessarily need the cartoon format to participate in the “my parents at age” meme, as others have simplified the format on Twitter.

Is the “my parents at age” meme depressing? Sure! But hey, as the smallest concession we have going in our favor—at least divorce rates are at an all-time low? And though that may be partly because people are waiting longer to get married or simply just cohabitating due to financial instability, we’ll take the minor win.

More on the Daily Dot:

Twitter’s ‘This claim is disputed’ label becomes a meme