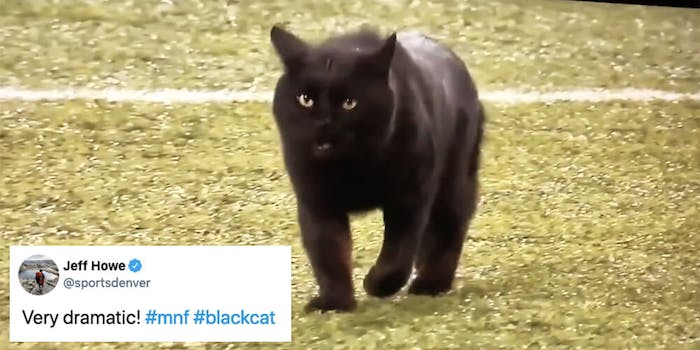 All holy hell broke out during Monday Night Football on Nov. 4, when a black cat ran out onto the field at MetLife Stadium and temporarily delayed the showdown between the Dallas Cowboys and New York Giants. The feisty feline could not be stopped—would not be stopped—as the players and refs stood around, helplessly watching it do its kitty cat thing.

Ever the consummate professional, sports announcer Kevin Harlan rolled with the punches, giving a detailed rundown of the cat’s progress on the Westwood One broadcast—and even fitting in a shout-out to the game’s sponsor.

“He’s walking to the three… He’s at the two, and the cat is in the CDW red zone,” Harlan announced. “Now a state trooper has come on the field and the cat runs into the end zone! That is a touchdown!”

Kevin Harlan's Westwood One radio call of the cat on the field is, as you might expect, an all-time great call. How much of a pro is Harlan? He worked a sponsor read into it. pic.twitter.com/3x0MVNEHNY

The cat then briefly fled into the stands before returning to the field, then running off into the tunnel by the end zone.

Suffice to say, the players were rattled. After the Cowboys went on to win by 37-18, defensive end Demarcus Lawrence later told Sports Center that he knew the black cat was a bad omen for the Giants.

.@TankLawrence shared his feelings on the black cat that was on the field 😆 pic.twitter.com/Tg8AbV8lm5

“I was like, man, game over. If a black cat runs on the damn field on a Monday Night Football game, a black cat, you might want to call it quits, bro. Y’all’s luck is terrible,” Lawrence joked, adding that he “hates” cats.

In other words, bad news for the Giants, who actually had been leading the game, pre-cat. Everyone else, on the other hand, couldn’t get enough of the black cat, who you might even say was the MVP of Monday night’s game, if the response from sports fans on Twitter was any indication.

Some had jokes and memes about the black cat:

#blackcat’s wife waiting for him to get home from MNF. pic.twitter.com/pZxgRm6LWA

I bet you that cat tackles better than Jarrad Davis

Even the preemptively-maligned CATS movie Twitter account got in a joke. “I told y’all you were gonna believe.”

I told y’all you were gonna believe ✨ #blackcat #MNFxESPN https://t.co/g2FGGnXTdA

The black cat was likewise a big hit for the four-legged friends watching at home, as several people recorded their own cats (and dogs) reactions to the wild card on the field.

For anyone wondering how the cat got there in the first place, Sports Illustrated journalist Madelyn Burke inquired with building security. While a cat getting onto the field is clearly uncommon, MetLife Stadium is home to a number of resident stray cats.

“They usually come out after the game, people feed them, etc.,” she tweeted. “They live in the bleachers, I’m told this one must have gotten startled out by fan noise.”

Asked building security about the black cat on the field: Apparently there are some resident stray cats at MetLife— they usually come out after the game, people feed them, etc. They live in the bleachers, I’m told this one must have gotten startled out by fan noise #journalism

Little known fact: most stadiums have a number of cats that live at the facility. With the amount of food left behind by fans, if you didn't have these 'barn cats' you would have a major rat problem#MondayNightFootball #BlackCat #Cowboys pic.twitter.com/oOtJ7wHGNk

As of Tuesday morning, the black cat was still on the lam, however, MetLife Stadium officials have promised to take it to a veterinarian if and when it is located. Godspeed, El Gato.