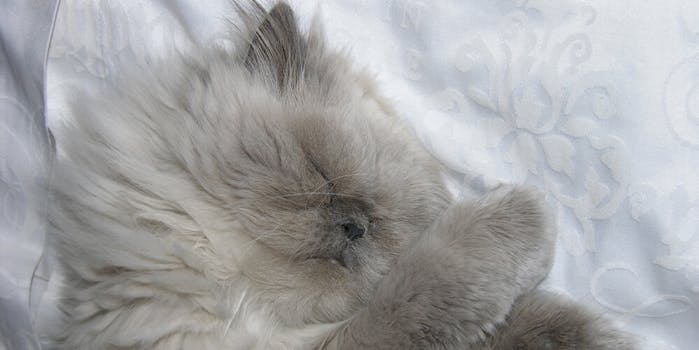 Cat has so much sex it lands him in hospital

Naturally, the internet loves him.

It sounds like something from a comedy sketch, but we promise it’s real. One smug little cat in China managed to have so much sex in one night that he ended up on a glucose drip to treat his exhaustion and dehydration.

Xiaopi, a pedigree Persian Blue, was left at a pet hotel in South China by his owner. Despite warning the staff that Xiaopi wasn’t neutered, they still chose to let him out of his cage before leaving for the night—and Xiaopi took full advantage of it. Even though they’d also forgotten to feed him that day, Xiaopi mated with at least five females before the night was through, leaving him in a state of extreme exhaustion and in desperate need of fluids.

I ain't mad at you, Xiaopi, the Russian Blue Cat.
If I was free to roam around in a pet hotel…I would of put in work too. What better reason to be half-dead…survivin' off a glucose drip with your dick in a sling than from having a wild… https://t.co/CDWzKKNXCg

Though the pet hotel initially tried to blame the outraged owner for the situation, even demanding that he explain the situation to the owners of the soon-to-be mommy cats, he wasn’t taking it laying down. The hotel swiftly did an about-turn, apologizing and agreeing to cover Xiaopi’s medical bills as well as those of any of the lady cats left with an unintended souvenir of their stay. Sources fail to mention if any of Xiaopi’s paramours are also Persian Blues, but if they are then this could be an unexpected windfall for the owners as people will pay up to $2,000 dollars for a kitten of that breed.

People stan the ambitious little furball, with Twitter user @inandoutofcars saying, “he was so committed to the party he just wouldn’t stop until he could party no more. icon.”

'Mr Zhao said Xiaopi has since regained his strength and is in a stable condition & very much looking forward to a return visit next year'. 😼😽

After all, we are all Xiaopi.

Turning him into a Chad meme.

I assume Xiaopi is Mandarin for Chad.

They’re also furious with the pet hotel for being so irresponsible. Aside from the issue of unintended kittens, unspayed male cats can get aggressive with other animals—especially each other—and the lack of supervision could have got some of the kitties hurt.

Ok. So I’m furious that the kitties were just left to roam around, without being fed and without it being previously agreed to, especially with an intact male that could have gotten into fights with the other cats on top of the obvious. But also, Daaaayyyyuuummm Xiaopi! 😂

Pictures of Xiaopi are hard to come by, but if you want to see more of the smug little monster, YouTuber Lord Spode has what appears to be exclusive video footage as well as of the incredibly luxe pet hotel he was staying in.