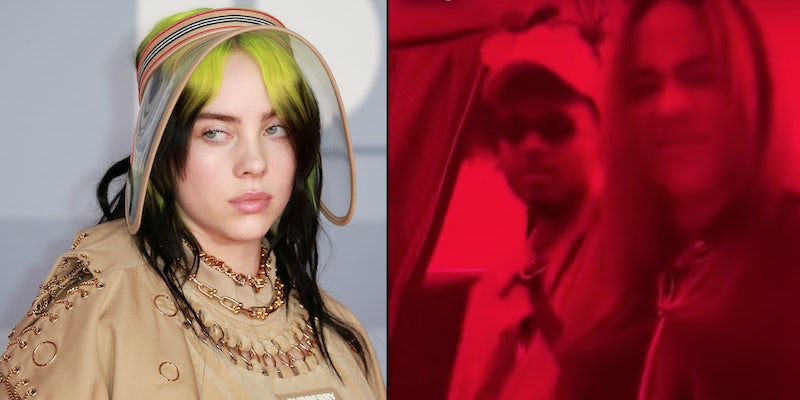 ‘Just gross’: Fans are concerned after learning of age difference between Billie Eilish and her ex-boyfriend when they started dating

'Is anyone gonna talk about how Billie Eilish was groomed by that grown ass man.'

Some fans are accusing Billie Eilish’s ex-boyfriend of grooming her after learning of their relationship in her new documentary Billie Eilish: The World’s a Little Blurry.

Eilish confirmed for the first time via the documentary that she was in a relationship with Brandon Quention Adams, an artist who goes by “Q” but performs under the stage name 7:AMP. In the nearly two-and-a-half-hour film, which was released on Apple TV+ Friday, Adams is first introduced at one of Eilish’s concerts in November of 2018 when she was 16 years old. He was 22 at the time, according to Us Weekly.

A montage then shows them holding hands at her 17th birthday party at an ice skating rink. “He’s so fine,” she says, looking at a photo of them cuddling. “Oh, my gosh.”

At one point in the doc, Eilish professes her love for Adams. “I love you. I’m in love with you,” she tells him over the phone before the release of her debut album, When We All Fall Asleep, Where Do We Go?, in March of 2019.

The doc also captures the lows of their relationship and its ultimate demise.

In April of 2019, at Eilish’s first Coachella performance, Adams fails to show his support for her. She tells a friend he broke his hand by punching a wall, calling him “self-destructive,” according to Insider.

Shortly after, they break up.

“I just wasn’t happy, and I didn’t want the same things he wanted, and I don’t think that’s fair for him. I don’t think you should be in a relationship super excited about certain things that the other person couldn’t care less about. I don’t think that’s fair to you. I didn’t think that was fair to him. And there was just a lack of effort, I think. I literally was just like, ‘Dude, you don’t even have enough love to love yourself. You can’t love me, dude. And you don’t. You think you do,’” she says, adding, “I don’t want to fix him. I can’t fix him. I’ve tried.”

Fans online are now expressing concern for the young singer, with many accusing Adams of grooming Eilish and calling their relationship “gross.”

“So am i the only one concerned that billie eilish was groomed by her ex boyfriend? she was 16 and he was 22 when they started dating. sounds a little too statutory r*pey for me….” one fan wrote on Twitter.

Another called for the protection of all “girls in the industry.”

Others are taking aim at the now-19-year-old’s parents for letting the two engage in a relationship. “How could billie eilish’s parents ALLOW a 22 yr old man to date their 16 yr old daughter ??????????? what the fuck ??????” one questioned.

Fans are, in general, upset with how Adams treated Eilish in the doc and are lauding the star for putting “his ass on BLAST” in it.

Adams reportedly deactivated his Instagram account on Tuesday and maintains a pretty low profile online, according to Us Weekly. And that’s probably for the best, given how upset Eilish’s fans currently are.