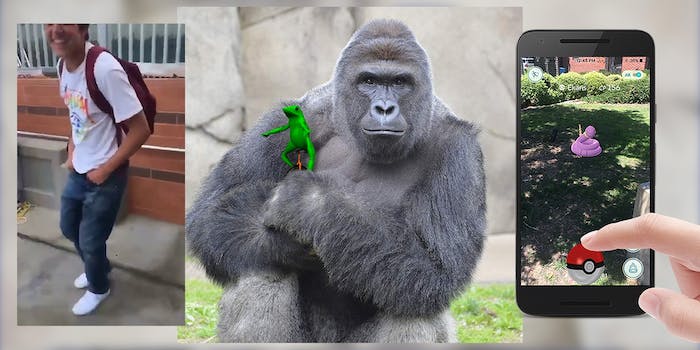 The biggest memes of 2016, according to Google

Google has released its list of the most-searched memes of the year, and it’s full of surprises. One surprise is that just under half of the entries on the list aren’t memes—they’re just celebrities, or TV shows, or video games.

What’s the difference? In a nutshell, media properties and personalities are marketed to you for profit, from the top down. Memes spread organically, from the bottom up. Attempts to profit from them often cause them to wither and die.

So, let’s take a look at Google’s list and consider what’s a meme and what’s not.

No one outside of Cincinnati knew who Harambe was before he became famous as The Ape Who Died, and the subject of many a tasteless joke. Harambe memes started as wellspring of creative (and sometimes horrifyingly cynical) humor, but eventually devolved into another tool in every racist Twitter troll’s arsenal. R.I.P. Harambe.

What’s more authentic than a video of a high school goofus with a catchphrase? The montage of poor Daniel having his shoes mocked on the daily was a natural fit for Twitter, and also a natural flash-in-the-pan. It mentioned a brand—the white Vans—and the brand made sure not to let us forget it.

There were certainly memes about the augmented reality mobile game Pokémon Go, but the phenomenon was a purely marketing-driven one. Millions of players flocked to it due to its already-popular branding, not its horribly glitchy gameplay.

Dat Boi, a 3D frog on a unicycle paired with the words, “o shit waddup,” was a meme. We killed him.

The caveman form of beloved cartoon sponge Spongebob Squarepants is part of the TV show’s canon, but the amount of effort memeheads put into derivative works turned him into something new.

SpongeGar (Caveman Spongebob) is the new meme rising in popularity. The SpongeGar memes out there are hilarious. pic.twitter.com/ovLvnLDFCJ

Human swimmer and celebrity. Not a meme. One photo of Michael Phelps, the one where he’s glowering and has his hood up, was a meme this year. Phelps himself? Just a guy with more gold medals than anyone in history, who did not need the internet to make him famous.

when you gotta win gold at 3 but take over the galaxy at 4 #PhelpsFace pic.twitter.com/HQHlgLqUUo

Lord knows Donald Trump’s presidential campaign was the center of gravity for meme content this year, from his uniquely expressive orange Muppet face to his iconic red hats. He was even merged with perhaps the purest example of an internet meme, Pepe the Frog. But Donald Trump is a reality television star, the president-elect, Time’s Person of the Year, and probably the most famous person in America right now. He’s a product, not a meme.

Verdict: Not a meme. Sad!

Making a Murderer, the Netflix series centering around a pair of possibly bogus murder convictions, produced a couple of breakout meme stars: Steven Avery’s defense attorneys, Dean Strang and Jerry Buting. But a popular television show does not a meme make.

Verdict: Wrongfully convicted as a meme.

Yeah, Ken Bone was on TV, but he was also a completely unknown audience member at a presidential debate. TV didn’t create him, it just put his mustachioed face and red sweater in front of us, and the internet did the rest. That turned out to be a terrible idea, but there’s no denying it happened.

A surprise at number 10, Bryan “Birdman” Williams is a middling rapper and founder of Cash Money Records. He has beef with everyone and refuses to release Lil Wayne’s masterpiece Tha Carter V.  Birdman crossed into meme status when he went on hip-hop radio show The Breakfast Club and displayed zero chill, throwing a tantrum and threatening the hosts. Black Twitter lost its mind over Birdman’s backfired attempt to get some “respeck on my name” and clowned him without mercy, turning him from just another famous jerk into an almost Crying Jordan-level meme.

Overall, Google’s got a 60 percent hit rate in identifying actual memes, a failing mark under most grading systems. It would be interesting to see the methodology the search giant used to identify meme contenders and to see a deeper list of rankings, but these are secrets known only to Google.

Want to really relive the year in memes? Check out our list of the best memes of 2016.